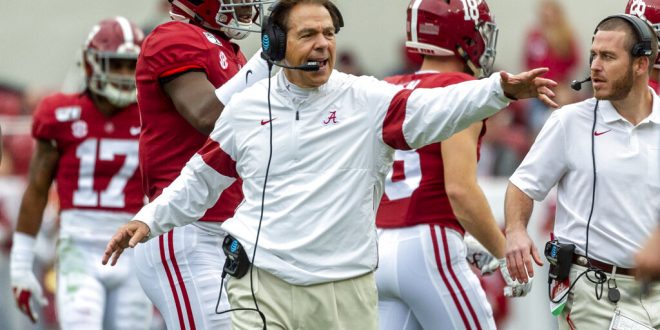 Alabama head coach Nick Saban yells to his team during the first half of an NCAA college football game against Western Carolina, Saturday, Nov. 23, 2019, in Tuscaloosa, Ala. (AP Photo/Vasha Hunt)

The Iron Bowl. One of college football’s most classic rivalries. A new chapter will be written on Saturday with the playoff implications both teams are accustomed to. No. 5 Alabama and No. 16 Auburn are both coming off convincing week 13 victories in preparation for this matchup.

The Tigers secured a 59-0 victory over Samford, in which they held the Bulldogs to 114 yards of total offense. On the other side, quarterback Mac Jones resumed starting duties with ease in a dominant 66-3 win over West Carolina. There are a variety of factors in play to determine who will reign victorious in this storied rivalry.

After a season-ending injury to star quarterback Tua Tagovailoa, the outlook for the Tide seemed gloomy. Head coach Nick Saban explained why this injury was so tough for the team.

On Saturday, all eyes were on Mac Jones as the redshirt sophomore resumed starting duties. And the young quarterback shined. Jones completed 10 of 12 passes for 275 yards and three touchdowns. He was eventually pulled in the third quarter after the Tide cruised to a 38-0 lead in the first half.

The unknown for this offense, of course, is how Jones will be able to fare against a seasoned defense. The Tigers have bullied teams in the trenches all year, with star players Derrick Brown and Marlon Davidson. Auburn ranks 14th nationally in total defense, holding teams to an average of 306.5 yards per game.

Of course, Jones has a variety of offensive weapons at his disposal and he made use of them on Saturday. Whether he’s handing it off to talented running back Najee Harris or throwing it up for star wide receivers, Jerry Jeudy and DeVonta Smith, Mac Jones should have the offensive talent to be successful.

It’s been an interesting tenure for Auburn head coach Gus Malzahn and one with no shortage of doubts. Tough losses to Florida, LSU and Georgia this year haven’t helped dispel those doubts. With a team this talented, especially on the defensive side of the ball, rumors have already started swirling about Malzahn’s future with the team.

The Tigers are already well motivated by the emotions associated with an in-state rivalry. But does the fact that Malzahn’s future might hinge on this game give those Auburn players some extra motivation?

It’s no surprise that the Iron Bowl has some serious implications for the College Football Playoff. The season-ending injury to Tua was a national story because of how it shifted the race for the Top 4. Now, after a loss to LSU, Alabama might be missing the Playoff for the first time ever.

However, there is still a real possibility that the Crimson Tide make it to the playoff without an appearance in the SEC Championship. This only happens under a couple of different circumstances starting with this game on Saturday. The name of the game for the Tide is style points; if they’re going to beat Auburn on Saturday in Jordan-Hare Stadium, they have to do it in convincing fashion.

This is no easy task, as every loss that Auburn has suffered has been by one possession with the one outlier being their 24-13 loss to the Gators.

For the Tigers, outside of wanting to put the nail in the coffin of Alabama’s playoff hopes, they still have a chance for a 10-win season. This would only be the third of such a season under Gus Malzahn.

This is actually the first time since 2011 that the winner of the Iron Bowl won’t go on to win the SEC West. Even still, there’s plenty of national storylines going into this game and all eyes will be on these two Alabama juggernauts. Will the Tigers play spoiler and defend their home turf? Or will the Crimson Tide win on the road and keep their playoff chances alive?

I'm a third-year student at the University of Florida passionate about storytelling and sportswriting. My goal is to work in communications for a professional sports team after I graduate.
Previous Santa Fe Women’s Basketball Unable To Overcome The Chipola College Indians
Next Gators Men’s Basketball hosts Marshall in Black Friday Matchup