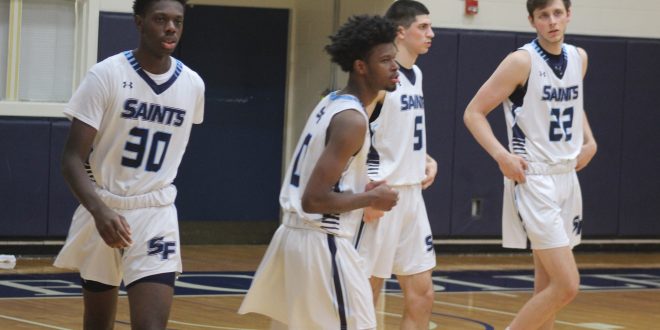 An electric performance by Yaw Obeng-Mensah fueled the Santa Fe College men’s basketball team on Wednesday night. The freshman forward from Toronto finished just shy of a double-double with 28 points and nine rebounds.

Obeng-Mensah’s effort failed to save the Saints however, who lost to the Polk State Eagles, 92-81. Four Eagles reached double-digit point totals on the night.

Sophomore JJ Rosario provided a boost off the bench with 17 points of his own. Steals and blocks led to many fast breaks that jump-started the Eagles’ offense.

“One thing that we focus on all year long is our defensive intensity,” Giles said. “Push the ball in transition, because that’s going to create good opportunities for us offensively.”

Santa Fe head coach Chris Mowry noted that his team’s lack of ball security early on hurt it in the long run.

“They definitely got their hands on some passes the first 10 minutes of the game that ended up being breakaway layups or dunks,” Mowry said. “We don’t even get a chance to defend in those situations, so we’ve got to try to eliminate those, be stronger with the ball and take better care of the ball.”

Santa Fe forced to play from behind

Polk State established a sizable lead halfway through the first half. The Saints spent the rest of the game playing catch-up, and cut the lead to five at one point in the second half.

“Our energy and effort were much better in the second half,” Mowry said. “I was proud of our effort and we’ve just got to keep working to get better.”

Sophomore guard Ryan Leonard notched 20 points on the night, and sophomore center Luka Filipovic ground out 12. None of the Saints matched the offensive spark plug of Obeng-Mensah; his 17 second-half points kept the fire burning for Santa Fe late.

“He broke his wrist Friday,” Mowry said. “I would say a long shot to return this year. We’ll wait and see how quick he heals and how rehab goes.”

Santa Fe (6-5) gets a rematch on the road Saturday against the State College of Florida Manatees (9-4). The Saints lost in overtime to the Manatees last time, 101-92.

“They’re another high-octane, up-tempo team,” Mowry said. “We’ve got to figure out how to slow them down and defend them on the other end. It’ll be a big challenge for us.”