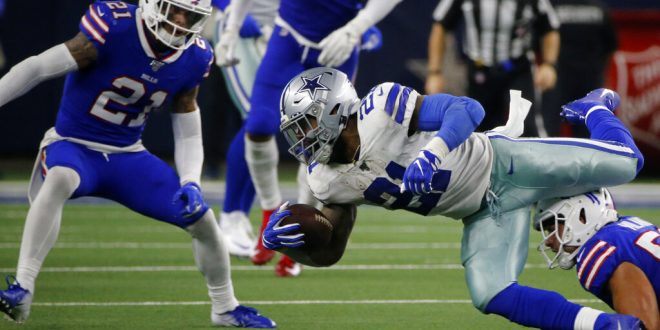 The 6-6 Dallas Cowboys face the 6-6 Chicago Bears for the first time in three years on Thursday, Dec. 5. The last time the two teams played at Soldier Field was in 2014 when the Cowboys came out victorious 41-28. Both teams had playoff expectations entering this season, but they will try to keep their playoff hopes alive tomorrow night.

Despite sitting atop the NFC East, the Cowboys’ season has not gone according to plan. Just ask veteran tight end Jason Witten who says the team should ignore the critics and hone in on fixing their mistakes.

Even after their 26-15 home loss against the Buffalo Bills on Thanksgiving, Dallas heads into Chicago as three-point favorites just 30 hours until kickoff. Part of the reason could be attributed to the Cowboys’ league-leading pass attack, which is spear-headed by quarterback Dak Prescott.

Prescott’s 3,788 passing yards are the most in the NFL, though Prescott isn’t the only weapon on the Dallas offense. Running back Ezekiel Elliott is ten yards away from surpassing 1,000 rushing yards, the third time in his four-year career. Bears’ Head Coach Matt Nagy knows that containing Elliott will be tough, considering all the ways Elliott can make defenders miss.

Nagy also lauded the Dallas defensive line, which is headlined by edge rushers Robert Quinn and DeMarcus Lawrence. The duo has combined for 14.5 sacks and 58 tackles, enough for Nagy to praise the veteran defenders.

Unlike the Cowboys, the Bears are third in the NFC North as they are sitting on the outside of the playoff race. Their win against Detroit on Thanksgiving certainly helped, especially with quarterback Mitchell Trubisky’s 338-yard, three-touchdown performance. Trubisky has had a roller coaster of a season that includes two games missed due to a shoulder injury. Nonetheless, Cowboys’ Head Coach Jason Garrett complimented Trubisky for his recent contributions to the Chicago offense.

On the defensive side of the ball, the Bears have allowed the fifth-fewest passing touchdowns and the ninth-fewest passing yards. Cornerback Kyle Fuller has had a solid year in the Chicago secondary, racking up three interceptions and ten pass deflections. While the Bears’ secondary hasn’t repeated last season’s success, Dallas wide receiver Amari Cooper says the unit should not be ignored.

Of course, the biggest name suiting up for the Bears is outside linebacker Khalil Mack. The 2016 Defensive Player of the Year leads the team with 6.5 sacks and five forced fumbles. Mack will be tasked with providing pressure on Prescott, who is already aware of Mack’s monstrous presence.

The game can be viewed tomorrow, Dec. 5, on FOX at 8:20 EST or on either team’s respective broadcasts and radio stations.