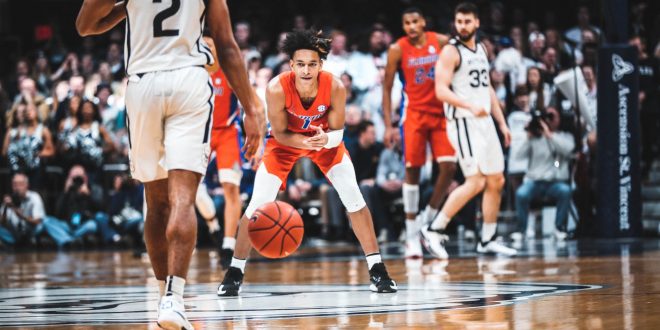 Florida's Tre Mann (1) sets up on defense against Butler's Aaron Thompson (2). Mann had 9 points in Florida's loss to Butler. (Credit @GatorsMBK on Twitter)

With the win, Butler extends their non-conference home winning streak to 56 games, which is the best in the nation.

Florida’s Kerry Blackshear Jr. led all scorers with 17 points and five rebounds while Butler’s Sean McDermott had 16 points and seven rebounds off of three 3 pointers.

The Bulldogs had four players score double-digit points and three players with more than one three-point make. Butler also outscored the Gators in both halves.

First and foremost, Florida struggled to shoot the ball from three-point range against Butler. The team shot a collective 6 for 26 from beyond the arc and missed open looks consistently.

Blackshear Jr, who has been more than reliable as a catch-and-shoot three-point shooter, struggled to get much of anything going from deep. He shot 1 of 6 for the game from range and got six of his 17 points from the free-throw line.

Butler entered its match up against the Gators third in the country in fewest turnovers. They continued this streak, only committing 10 turnovers, which is around their average.

Florida struggled to hit free-throws against Butler. Whether it’s because of the atmosphere, or the poor practices heading into Saturday’s game, the Gators shot 67% from the charity stripe.

Butler’s Kamar Baldwin, who leads their team in scoring average, had two fouls in the first four minutes of the game. This played a huge role in keeping the Butler offense contained early in the game, as Baldwin had to go to the bench. This would not last long, as Baldwin would only commit one other foul for the entire game and went on to spark Butler’s scoring runs.

Florida made many ‘freshman mistakes’ throughout the game. Tre Mann jumped nearly into the stands committing a foul off of a McDermott pump-fake, and multiple times Butler shot three free throws after being fouled late in the shot clock.

Florida head coach Mike White said coming into the game that the team has been having bad practices. These look like things that are bleeding into the team’s play on the court.

Scoring runs defined the first half. Butler opened up a 12-2 run to take the lead halfway through the first half, then Florida answered that with a 14-4 run of its own.

Butler responded with a 19-4 run over the final 3:21 of the first half to take a 10 point lead into the half. This run mainly sparked from the Bulldogs’ three-point shooting, going 6 for 13 through the first period.

In the second half, the Gators could not get a comeback run going. Consistently Butler answered shots from Florida with daggers of their own. The Bulldogs simply outpaced the Gators consistently.

Florida has a bit of a break coming up. The Gators’ next game is against Providence on December 17 at 7 p.m.

Steven Walker is a beat writer for ESPN Gainesville and is currently studying Journalism & Sports Media at the University of Florida.
@swalker_7
Previous Florida volleyball sweeps UCF to advance to Regional Semifinal
Next Did the College Football Playoff Committee Get it Right?