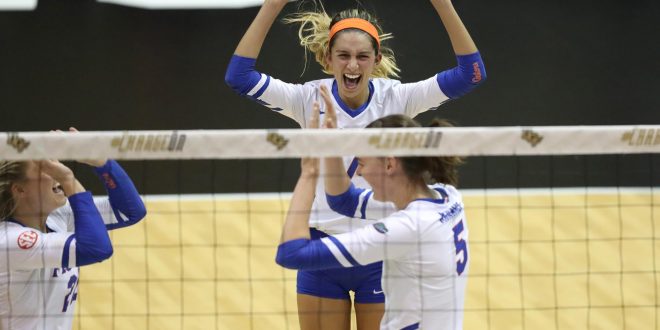 Florida volleyball swept the UCF Knights on Friday night in Exactech Arena to advance to the Regional Semifinal of the NCAA Volleyball Tournament.

In the round of 32, the Gators started off shaky before building offensive momentum they would carry the rest of the match.

Florida punches its ticket to the regionals!

In the opening set, the Gators jumped out to an early 4-0 lead before UCF quickly came charging back.  The Knights capitalized off of multiple service errors early in the first set.  After the set 6-6, the Knights and the Gators would go point for point until UCF slowly took the lead.

After the timeout, a kill from Holly Carlton followed by back-to-back kills from Paige Hammons would tie the match at 20-20.

Once Florida found their groove, the Gators played some of their best offensive and defensive volleyball.

In the second set, the Gators held the Knights to a hitting percentage of .132. In addition, the Gators defense recorded three blocks and 16 digs.  Florida managed to contain the explosiveness of UCF outside hitters McKenna Melville and Kristina Fisher.  Melville did record nine kills and 16 digs on the night.

In the third set, Florida continued contain the UCF offense. The Florida back court continued to come up big for the Gators, recording 23 digs.  Kramer and Hammons each recorded seven kills in the third set pushing the Gators to a 25-17 victory.

A change in the Gators starting line-up included the addition of defensive specialist Riley Fischer as the Gators were without leading scorer, outside hitter Thayer Hall, for the second consecutive match.

Florida defensive specialists Paula Cerame, Chanelle Hargreaves, Allie Gregory and Fischer came up big for the Gators. Gregory lead the team with 17 digs against the Knights.

Hammons commented on the way the Gators defense stepped up against UCF.