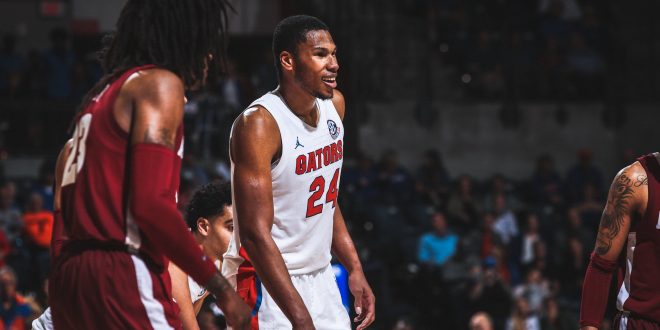 The Florida Gator men’s basketball team travels to Columbia on Tuesday to take on the South Carolina Gamecocks.

Florida (9-4) is fresh off of a two-overtime win over Alabama where they overcame a 21-point deficit to win 104-98. The Gators now stand at 1-0 in SEC play this season.  South Carolina (8-5) lost to Stetson on December 30th in their last action.  The Gamecocks open up conference play against the Gators on Tuesday.

South Carolina, much like Florida, has had its ups and downs this season.

The Gamecocks defeated number nine Virginia and has beaten a good Clemson team but the Stetson loss may have been Carolina’s worst performance of the season.

The last time South Carolina and Florida played, the Gators lost 71-69 in Gainesville. Florida head coach Mike White currently stands at 2-5 against the Gamecocks in his tenure.

The Gators have scored over 100 points in their last two games. In each of their last three wins, Florida has topped their season-high for points.

Florida’s Kerry Blackshear Jr. has been on an absolute tear this season, recording seven double-doubles in 13 games played. In his last three games, Blackshear has scored over 20 points per game and shot 92% from the free-throw line.

Florida’s Andrew Nembhard is coming off of his best performance of the season. He scored 25 points, including 15 in the last five minutes to complete the comeback against Alabama. Nembhard also leads the team in assists per game with 5.8.

According to head coach Mike White, Nembhard has been the quarterback of the team this season.

Both Florida and South Carolina are stingy on defense.  The Gators give up only 65.3 points per game, while the Gamecocks only allow 64.8 points per game.

The Gamecocks’ leading scorer, A.J. Lawson, is coming off one of his lowest-scoring performances of the season versus Stetson. Lawson, a 6’6″ sophomore guard, gives South Carolina a threat from deep and in the paint. He has ability to finish in traffic that helps propel him to excellent scoring performances this season, like his 28 points against Cleveland State.

#Gators @Scott_lewis_23 says that nothing changes for the Gators going on the road to South Carolina. He says they've been battle-tested, and they're ready.

Playing in Columbia looks to be a challenge for a young team like Florida. Only one player on Florida’s roster has played at South Carolina. In 2017, Blackshear Jr. played in Columbia as a member of the Virginia Tech Hokies.

According to Blackshear, this Florida team is equipped to play in hostile environments.

Tip-off of Florida’s matchup against South Carolina is at 7 p.m. on ESPNU.

Steven Walker is a beat writer for ESPN Gainesville and is currently studying Journalism & Sports Media at the University of Florida.
@swalker_7
Previous The Fuel to Miami’s Fire is Young Stars
Next Fultz Lifts Magic Over Nets