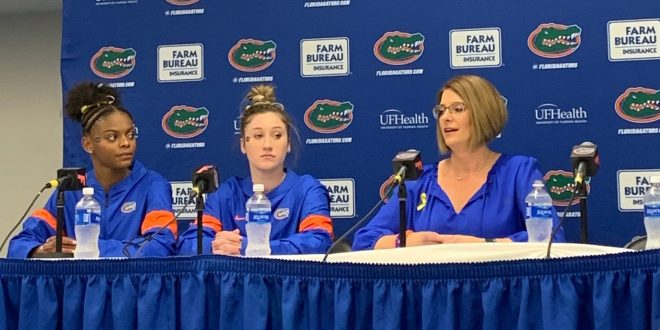 According to head coach Jenny Rowland, the Gator gymnastics team was carrying a chip on their shoulders going into Friday’s season opener against 19th ranked Arkansas. This “chip” stems from the end of last year, when Florida failed to qualify for the NCAA Championship for just the second time in 38 years.

The Gators, who opened the season ranked number three, defeated Arkansas 197.350 to 194.400 in front of a crowd of over 7,500 in the O’Connell Center. The team, as well as the noisy audience, wanted to start the new campaign off right.

Standout Performers of the Night

Sophomore All-American Trinity Thomas was the only all-around performer for the Gators, and she dazzled. Thomas registered the highest bars, beam and floor scores of the night on both teams, including two 9.975’s (beam and floor.) These two results tie her career-best in those categories.

The build-up to this season has been unique for Thomas, as she is training simultaneously for the US Olympic Trials team while balancing school and Gator gymnastics. But, she was “itching” to start the collegiate season, and she started with a bang. Thomas had this to say about the team’s mentality ahead of the season opener:

Payton Richards is the only freshman on the squad this year, and she, perhaps unexpectedly to some, competed in three of the four events on Friday. She put up solid scores on vault (9.850), bars (9.800), and beam (9.825). In fact, Richards anchored vault and led off on bars. These are high pressure situations that Rowland does not usually put freshmen in. Perhaps the least surprised about Richards’ first regular season performance, though, was Rowland. The coach had this to say about the confidence she had in her freshman:

Senior Gator Amelia Hundley’s floor performance was another high point of the night. Her classic rock routine earned her a solid 9.850, and it was one of the crowd favorites.

Not the Start Arkansas Wanted

Arkansas, meanwhile, was especially let down by their balance beam performances. Juniors Kailey Gillings and Sophia Carter registered scores of 9.550 and 9.500, respectively. These were calculated into a beam score that came to be 48.250, far from Florida’s 49.475 in that category.

First-year head coach and Olympic gold medalist Jordyn Wieber will be disappointed by her Arkansas team’s overall score. Wieber, only 24 years old, is one of the youngest gymnastics head coaches in the NCAA. She was a member of the 2012 US gymnastics team that included Gabby Douglas, Aly Raisman, McKayla Maroney and Kyla Ross that took home team gold at the 2012 London summer games.

Florida’s next match up is next Friday at another SEC opponent,Missouri. The Tigers began the season ranked number eight.

I'm a senior journalism student at Florida. I love sports, and I love covering sports. I'm one of the beat writers for the Gator soccer team right now, and if you follow me on Twitter @johnmiceli13 you'll never miss a soccer update
Previous Game Preview: Gators Look to Win Third SEC Game against Missouri
Next Florida Men’s Basketball Falls to Missouri 91-75, Lose First SEC Game of the Season