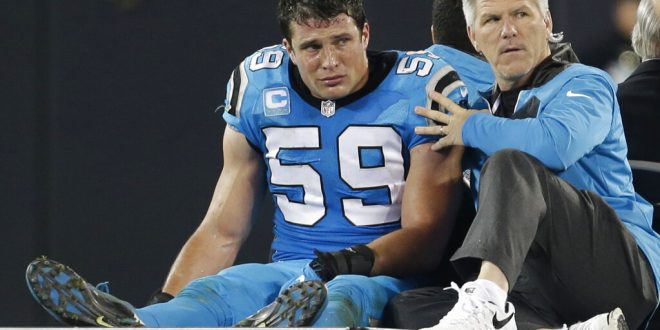 FILE - In this Nov. 17, 2016, file photo, Carolina Panthers' Luke Kuechly (59) is taken off the field after being injured in the second half of an NFL football game against the New Orleans Saints, in Charlotte, N.C. Panthers linebacker Luke Kuechly is retiring from the NFL after eight seasons. The 28-year-old Kuechly made the surprising announcement Tuesday, Jan. 14, 2020, on the team’s website. (AP Photo/Bob Leverone, File)

Within the past year, Colts’ QB Andrew Luck shockingly called it a career, and earlier in 2019, Patriots’ legendary tight end Rob Gronkowski did the same.

Now that Kuechly has joined them, three top tier NFL players have retired before turning 30.

More and more players are choosing to retire to avoid life-threatening injuries. It’s a trend that has been gaining momentum in recent years.

Kuechly was drafted by the Panthers at ninth overall in 2012, and with good reason. When he entered the league as a 20-year-old in 2012, he took the league by storm and won rookie of the year and AP Defensive Player of the Year soundly.

Kuechly finished 2012 with 164 total tackles, 103 of which were solo and 61 of which were assists. 2012 was an outstanding year judged by any metric, but he was most known for his consistency.

Luke Kuechly didn’t have a single season where he recorded less than 100 total tackles. His lowest tackle total was 102 in 2016, when he played just 10 games due to injury. 2016 was an outlier when looking at his other seven seasons.

His 2015 season was the second-lowest tackle total of his career, as he recorded 118. He was injured that year too and played 13 games, again due to injury.

Aside from 2015 and 2016, Kuechly played all 16 games five times and 15 games once. He was a model of consistency and hard work for eight years. His absence leaves Panthers’ new coach

What’s next for Kuechly?

While Kuechly is moving on, he insists that the Panthers’ hiring new head coach Matt Rhule did not factor into his decision:

Kuechly has options after football, but that doesn’t mean he’s happy with leaving football.

“In my heart, I know it’s the right thing to do.” pic.twitter.com/mSDyJ0iEMw

With Kuechly retiring at just 28 years old and enough money to support him for the rest of his life, what will he do next?

Will he follow in the footsteps of fellow early-retiree Rob Gronkowski, or will he lay low like Andrew Luck? Only Kuechly can decide that, but if his career is any indication, he’ll be active within the NFL and his community going forward.

Kuechly’s retirement leaves a big hole in the Panthers’ defense he was a stalwart in for eight years. Whatever he decides to do, early retirement in the NFL is a trend that will likely persist in the future.

My name is Caleb Mikita, and I am a telecommunications major at the University of Florida from St. Pete, FL. I am a fan of all things sports, but my main passion is baseball. My long term goal is to become a sports analyst or writer for MLB Network.
@@caleb_mikita8
Previous Undefeated Auburn men’s basketball prepares for rivalry matchup against Alabama
Next Gator Men’s Tennis Suffers First Loss