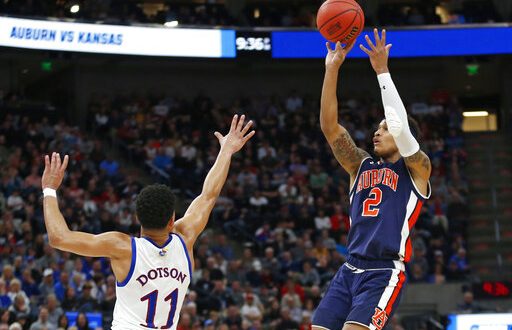 It’s the Iron Bowl, but not how you expect it to look. The Alabama Crimson Tide host the undefeated fourth-ranked Auburn Tigers on Wednesday, Jan. 15 at 9 p.m.

Alabama (8-7) enters this game fresh off the heels of a loss to 14th-ranked Kentucky, 76-67. Despite their less-than-stellar record, the Crimson Tide rank 6th in the country in points per game with 83.2. This evens out when looking at their points allowed per game, which is 338th in the country with 78.7.

The Tigers’ leading scorer, Samir Doughty, averages 15.7 points and 1.4 steals per game. The 6’4 guard from Philadelphia is in his second season at Auburn and has more than doubled his scoring average from the 2018-2019 season.

On the other end of the sideline, the Alabama Crimson Tide have a scoring guard of their own. John Petty Jr, a 6’5 guard from Huntsville, Alabama averages 16.7 points and 7.3 rebounds per game. A perennial stat-sheet stuffer, Petty Jr. plays a key role in the team’s high standing nationally in terms of scoring (6th) and rebounding (19th).

Auburn coach Bruce Pearl on Alabama: "It's a dangerous opponent. Obviously it's a rivalry for us. We'll have to be ready to for the environment."

Auburn is arguably untested so far this season. Out of their 15 opponents, none ranked in the top-25. Their most impressive win this season is likely their most recent win against Georgia. The Bulldogs’ Anthony Edwards, who ESPN ranks as their second-best prospect for the 2020 NBA Draft behind LaMelo Ball, scored 18 points in their 60-82 loss to the Tigers.

Alabama has been on the receiving end of devastating losses this season. On Jan. 4, the Crimson Tide blew a 21-point lead and lost to Florida in double overtime. Dropping winnable games like that behind a porous defense is why Alabama sits at 8-7 and 1-2 in the SEC.

Steven Walker is a beat writer for ESPN Gainesville and is currently studying Journalism & Sports Media at the University of Florida.
@swalker_7
Previous No. 1 Gator Men’s Tennis Host No. 2 Texas
Next Luke Kuechly retires from NFL at just 28