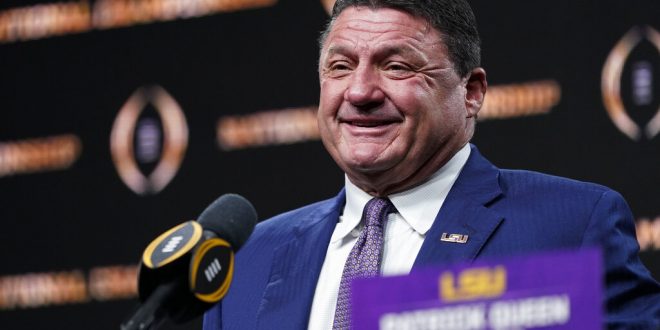 All good things must come to an end. Sadly, the historic LSU team put together by Ed Orgeron in Baton Rouge is ending as players enter the NFL draft.

LSU defeated Clemson on Monday 42-25 to win the 2020 National Championship and finish the season with a perfect record. LSU appeared unbeatable all season behind Heisman trophy winner quarterback Joe Burrow. In light of the Tigers’ success, players will use the program’s hype to attempt to play football at the professional level. To declare for the NFL Draft, players must officially make their decision by January 17.

In the past 24 hours, LSU’s passing-game coordinator Joe Brady has accepted a job with the Panthers, while S Grant Delpit, LB Patrick Queen, WR Justin Jefferson, C Lloyd Cushenberry, LB Jacob Phillips and LT Saadhiq Charles have all declared for the 2020 NFL Draft.

8 reasons why Joe Burrow had the greatest CFB season ever:

Without a doubt, Joe Burrow is going to be the first pick in the 2020 NFL Draft. Burrow had one of the most dominant college football seasons ever with 5,671 yards and a record 60 touchdowns. Burrow tore up all the best defenses in college football including Clemson, Florida, Georgia, Alabama, and Auburn. Words can not describe how substantial the Burrow loss is for LSU.

Grant Delpit was a lockdown safety for the Tigers this past season. Standing tall at 6-3 and 203 pounds, Delpit has the size and athleticism to be a great professional cover safety. Delpit had a strong junior season, recording 65 tackles and winning the 2019 Jim Thorpe award. Delpit is projected to be a first-round pick.

Justin Jefferson was under recruited as a two-star prospect but has shined as a five-star leader for LSU.

Tonight, he plays on the biggest stage in college football. #NationalChampionship pic.twitter.com/2M67LJ9GhH

Justin Jefferson had a breakout junior year, recording 111 receptions for 1,540 yards and 18 touchdowns. Jefferson showed off his NFL talent in the College Football Semi-Finals game against Oklahoma as he racked up 227 receiving yards and four touchdowns. At 6’3, Jefferson has the length and athleticism to be a first-round NFL Draft pick.

Despite being a redshirt sophomore, Chaisson is 6’4 and 250 pounds with the speed of a safety. Chiasson truly showed off against Oklahoma in the College Playoffs with two key sacks. Expect Chaisson to be picked in the first found as a speedy edge rusher.

Kristin Fulton is expected to be a first-round pick in the 2020 NFL Draft. Even though he has struggled with injuries, Fulton has the intangibles to be a strong corner at the next level. Fulton has good size at 6 feet, 200 pounds.

Previous No. 24 Lady Vols Travel to the Swamp
Next Beltran Out as Mets Manager Amidst Scandal