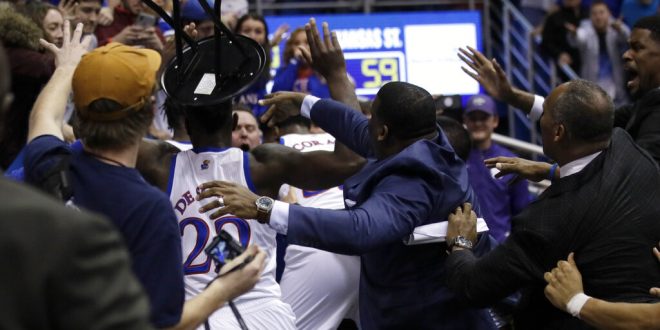 A fight between players spills into the crowd during the second half of an NCAA college basketball game between Kansas and Kansas State in Lawrence, Kan., Tuesday, Jan. 21, 2020. Kansas defeated Kansas State 81-59. (AP Photo/Orlin Wagner)

It wasn’t all sunshine and rainbows in the Sunflower State Tuesday night as a brawl broke out.

As the clock was ticking down the final seconds, the chaos began. Jayhawks forward Silvio De Sousa blocked Wildcats guard DaJuan Gordon’s dunk attempt. The denial at the rim sent the shot into the stands. Following the rejection, De Sousa towers over the freshman guard, lying on the baseline. This act of intimidation sent sparks throughout Allen Fieldhouse. Both players got in each other’s face. A few words were exchanged and things the bad blood boiled. This caused both benches to clear. Players, who weren’t even in uniform, stormed off the bench to get involved. Some tried to get some punches in. Others tried to break up the fight. The brawl even spilled into the handicapped section of the arena, forcing fans to flee from the scene for safety. The Jayhawk mascot was seen covering his eyes at the horror of all the violence in this historic college basketball rivalry.

Most noteworthy, De Sousa pulled a move seen to often in WWE. He was seen with a stool, raised above his head. He was ready to use it as a weapon. It wasn’t until a Kansas assistant coach recognized this. Immeidately, the stool was removed from De Sousa’s possession. The Jayhawks may have picked up the 81-60 win. However, a violent ending overshadows this rivalry matchup.

The fight took several minutes to break up. Coaches and police officers were in the thick of it, trying to stop the madness. Once the situation was under control, only five players on each team stayed on the floor. The remaining players left the floor with ejections.

A statement from Director of Athletics Jeff Long regarding tonight – pic.twitter.com/9HhFlryJWy

University of Kansas athletic director Jeff Long calls the conduct, “simply unacceptable and not reflective of who we are.”

Consequently, Silvio De Sousa, for his involvement in the brawl, received an indefinite suspension. There’s no timetable for De Sousa’s possible return to the team.

Above all, Weber says the actions of his players doesn’t represent the team.

Likewise, Kansas head coach Bill Self says this is an embarrassment.

As a result of this first suspension, more suspensions are expected to be handed out once the review is completed.

These teams will meet again in February at Kansas State.