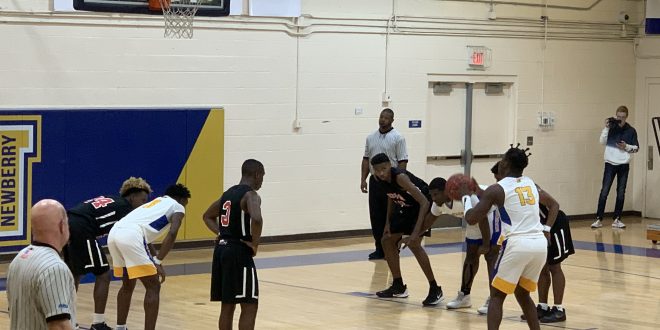 It was just that type of game for the Newberry High School boy’s basketball team.  Up until the fourth quarter, the largest lead the Panthers possessed was four points. In a game plagued by turnovers and fouls, the Panthers could not take a lead. To make matters worse, Newberry played without their star forward Jaylon Zullo down the stretch, as the senior dealt with foul trouble entering the fourth quarter. Miraculously, at the start of the fourth quarter, Newberry was only down by one, with Fort White leading 49-48. But the way the game had been going, there wasn’t exactly an optimistic tone in the gymnasium towards the Panther’s chances.

Newberry’s stars were shining bright. Jaylon Zullo took control of the first half with aid from guard Steven Nelson. Yet, Zullo began to enter foul trouble, and Nelson went cold. Pair that with sophomore Mahki Bostic having a quiet night, and a disaster was brewing for the sliding Panthers. After an 8-0 run from Fort White, it took the Panthers a few hard-fought possessions led by Leontre Robinson to get the game within one.

Heading into the fourth quarter down one, there was a sense of urgency contaminating the air of the gymnasium. After a fast start from the Panthers, the Indians went blow for blow and evened the game out. Enter the junior big man. Perry Sylvester hadn’t seen much time up to this point, and there wasn’t much to be said of his play to this point. But when number 13 entered the game, all of a sudden the Panthers found life. Of the 20 fourth-quarter points scored by Newberry, Sylvester put up 13 of them. Doing his best Mariano Rivera impersonation, Sylvester put the Panthers on his back and clinched a 68-64 victory.

“My team gave me my confidence,” Sylvester said of his fourth-quarter surge. To this point, the junior has averaged 10.2 points a game.  On a night where his scoring ability was in question, Sylvester silenced the critics and put his skill on full display. Sylvester’s heroics helped get Newberry back on track after a three-game losing streak, improving their record to 8-10.

Fort White’s 4-11 record is certainly not misleading. The Indians made critical mistakes all game long and could not put away the slipping Panthers even at their worst. One of the reasons Fort White was in this game for so long was due to Christian Wilson’s heroics. #11 made four three-pointers throughout the game, aiding his team in times of trouble. Yet, Wilson’s heroics were not enough, as the consistent fouls and turnovers finally caught up to the Indians.

What’s Next for the Panthers?

Newberry High School now stands with an 8-10 record ending their previous three-game losing streak. Next up is Eastside High School at home on Friday, January 24. The Panthers’ aspirations are not out of reach this season. At 8-10, Patrick Green’s squad could very well turn it around, especially if Perry Sylvester plays how he did tonight.

Sam Petosa is a Journalism major pursuing a Specialization in Sports and Media at UF. The South Florida native produces daily shows for WRUF, including "Sport Scene with Steve Russell, and "The Tailgate." In addition, Sam provides weekly sports updates for WUFT News and radio Sportscenter's for WRUF radio. Sam has been a writer at ESPN Gainesville since January 2020.
@sampetosa5
Previous Gators Men’s Basketball hits the road to face undefeated LSU
Next St. Francis boys basketball hosts struggling Trinity Catholic