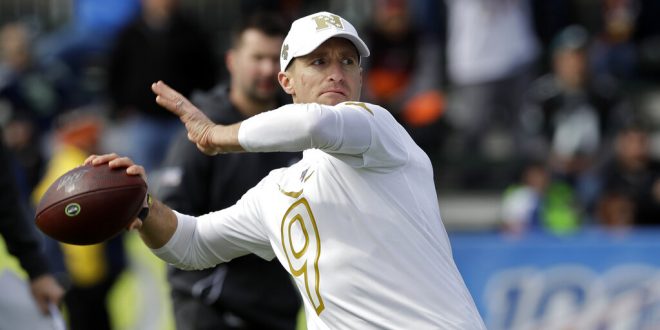 The date was March 14, 2006. That day, Brees penned a six-year, $60 million deal that drastically changed the landscape of the NFL for the following 15 years.

Fast forward to January 23, 2020. Brees is a Super Bowl Champion. Brees is the NFL’s all-time leader in passing touchdowns, yards and completions. Brees has also undoubtedly become an icon in the city of New Orleans.

And Brees is now, maybe for the first time since ’06, questioning the future of his NFL career.

At Wednesday’s Pro Bowl, Brees spoke to ESPN’s NFL Live regarding his desire to make a calm and assured decision on his playing career.

“I wanted to give it at least a few weeks, months, postseason, just to take a deep breath and decompress a little bit and get some time with the family and then just reassess,” he said.

Decompress or “Time to Stress”?

Next season would be Brees’ 20th season in the NFL. He’s scheduled to become an unrestricted free agent. But joining another team is out of the question.

Back in 2018, Brees said he has no desire to join another team’s payroll. He’ll play in New Orleans for as long as he’s in the league.

Patiently deciding upon his future is also nothing new for Brees and his family. Since 2017, the Saints have only offered him one-year contracts.

So is there anything different this time around for Brees and the Saints?

Perhaps, as the Saints’ QB situation gets more complicated when looking at the futures of Teddy Bridgewater and third-stringer Taysom Hill.

Brees and The Crew

In Brees’ five-game absence in 2019, Bridgewater went 5-0. In the Saints’ disappointing playoff loss to the Vikings, Hill ran for a touchdown and completed a key 50-yard pass.

“We’ll see. Obviously we’d like to have our whole team back,” Loomis said. “We just came off a 13-3 season. We’ve got a great locker room, great bunch of guys, and so in a perfect world, we’d have everybody back. But there’s free agency and a lot of things are going to happen between now and then.”

Brees’ personal situation may not be too complicated. The 41-year-old will likely elect to enter his 20th season in the league. But combine Brees’ age with the contract situations of Bridgewater and Hill, and the Saints have quite a few questions to answer.

Two-time Super Bowl Champion Eli Manning already announced his retirement this week. Philip Rivers, Tom Brady and Brees are all believed to still be deciding upon their future.

As a new decade begins, some of the all-time great quarterbacks of the NFL are certainly beginning to fade.