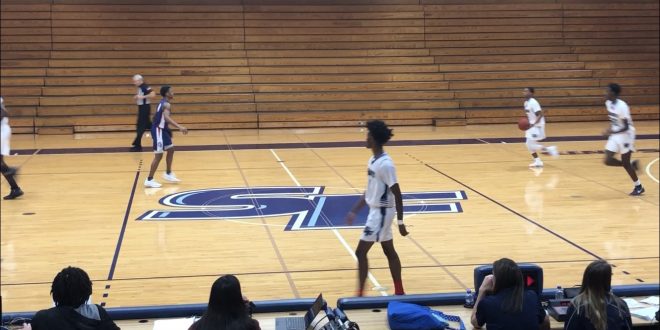 The Santa Fe Saints men’s basketball team gets a 96-83 home win on Monday night against PHS Academy in a game that was full of scoring. The Saints move to 10-13 on the season with the win.

“I just thought we looked lethargic, had a couple of turnovers and shot up a couple three’s that weren’t close to going in,” said Saints coach Chris Mowry on calling a timeout after his team found itself down 15-5 early in the first half.

The deficit would drop down to four after the Saints went on a 7-0 run led by guard Ricardo Jackson and forward DJ Henderson.

From that point on, the match up turned into an offensive battle between the two squads as they scored a combined 140 points in the last 30 minutes of play. The Saints would take their first lead of the evening with a Luka Filipovic layup with six minutes left in the half. Santa Fe led by six at the half, 43-37.

Santa Fe started the second half on a tear as they came out and hit three 3-pointers, two from guard Noah Thorpe, that propelled the team to 18 points in the first five minutes of the half and a 15-point lead over the Knights.

After the hot start for the Saints, the game continued in a back-and-forth affair that included a lot of scoring and free-throws down the stretch. As a result, Santa Fe maintained a steady lead throughout the second half before PHS Academy made a last effort to press with three minutes remaining in the half.

The Saints ended up toppling the Knights 96-83.

The Saints were led by sophomore 7-foot center Luka Filipovic who finished the night with 17 points and five rebounds, and freshman forward and team-high scorer DJ Henderson who had 22 points, five rebounds and was 3-3 from beyond the arc.

Santa Fe gathered 11 more offensive rebounds and outscored PHS Academy by 12 in second chance points.  The Saints scored 28 points off of turnovers in the contest which outpaced the Knights by 13. In addition, Santa Fe also got help from an unusual 69 points from their bench in the win.

Santa Fe’s next game pits them in a divisional match up on the road against Eastern Florida State College (15-9).