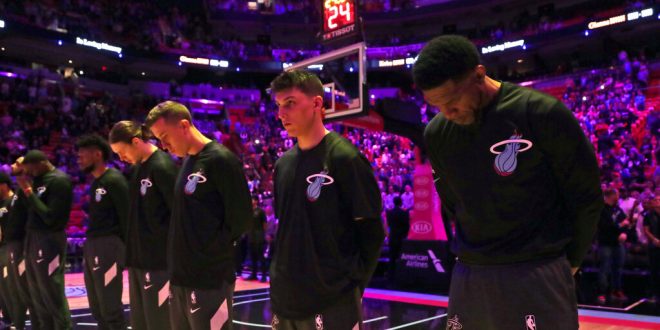 Miami Heat forward Udonis Haslem, right, and guard Tyler Herro, second from right, stand as the shot clock is set at 24 during a tribute to Kobe Bryant and his daughter Gianna is displayed at American Airlines Arena before an NBA basketball game against the Orlando Magic, Monday, Jan. 27, 2020, in Miami. They died in a helicopter crash in California Sunday. (AP Photo/Lynne Sladky)

The Miami Heat, led by stellar performances from Duncan Robinson and Bam Adebayo, continued to play good basketball as they beat the Orlando Magic 113-92 Monday night.  Robinson had 21 points, five rebounds while Adebayo had 20 points and 10 rebounds. The Heat shot a 53.2% from the field as well, including shooting over 50 percent from beyond the arc.

The Magic were led by Nikola Vucevic and Evan Fournier. Vucevic had 13 points and 12 rebounds while Fournier had nine points, four rebounds and eight assists.

Ever since the news of NBA legend Kobe Bryant’s death, NBA players having been paying tribute to him. Last night they lit up American Airlines Arena in honor of Bryant and his daughter Gianna.

During last night’s match up, the Magic and Heat decided to honor Kobe with 24-second shot clock violations. Bryant wore both the numbers 8 and 24 during his time in the NBA as a Los Angeles Laker.  Miami Heat guard Goran Dragic also honored the legend and his 13 year old daughter who passed by inscribing “#mamba” and “#mambacita” on his shoes. Kobe was widely known as the Mamba and they coined his daughter the mambacita.

Miami and Orlando will meet up again in a few days, this time in Orlando.