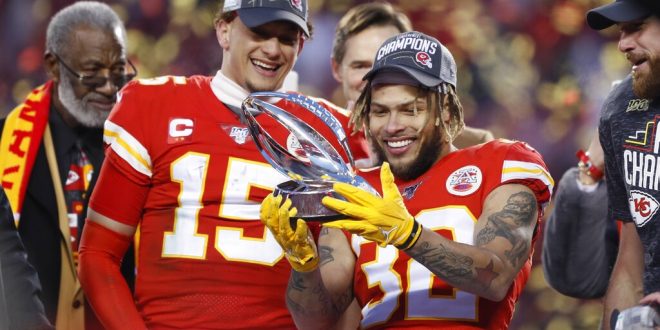 Is the Chiefs’ defense up for the 49ers challenge?

The Kansas City Chiefs will face the San Francisco 49ers in New Orleans for the 2020 NFL Super Bowl on Sunday. The 49ers have been a top team in the NFL from the start of the season beginning 8-0.

The Chiefs’ main obstacle they are going to face Super Bowl Sunday will be stopping the 49ers’ dominant offense. Kyle Shanahan is an offensive genius using Jimmy Garoppolo and Chief backs killing NFL defenses week after week. San Francisco averages the second-most points in the league at 30.2 points per game.

Kansas City started the season off pretty average at 5-3. The Chiefs then went on a huge run going 9-1 for the rest of the season after a major improvement offensively and defensively. The Chiefs’ second half of season, defensive line and defensive backs will be the key to the Chiefs stopping the 49ers offense.

After a slow start to the season, the Chiefs defense turned elite following Week 10 of the NFL season. Kansas City only allowed opponents to score 11.5 points per game for the rest of the regular season.

The Chiefs were given a scare early in the AFC Divisional Playoff game allowing 21 points in the first quarter to the Texans. Kansas City stepped it up for the rest of the game only allowing 10 more points.

In the AFC Championship, the Chiefs held the league rushing leader Derrick Henry to only 69 yards.

The Chiefs’ run defense had been pretty below average this season allowing 25th most runs yards per game at 123.9 yards. The 49ers have one of the best rushing games in the league with the combination of Tevin Coleman, Raheem Mostert, and Matt Breida.

Kansas City’s defensive line has been playing very well recently allowing only 95.7 rush yards per game over the last three games, which ranks them eighth in the NFL. The Chiefs defensive line is lead by defensive tackle Chris Jones. Jones is the big man in the middle for Kansas City, leading the team with 9 sacks. Kansas City has the 11th most sacks in the 2019 NFL season with 45.

Frank Clarke is the other dominates Chiefs’ lineman out of Michigan. At defensive end, Clarke has the potential to make game-changing plays shown though his eight sacks team-leading three forced fumbles.

Chiefs’ safety Tyron Mathieu said he and Clarke play with a chip on their shoulder every day giving them an edge.

Those give me me hope, they believe in me. It allows me to play fearless https://t.co/Xq466pI1WZ

The key to the Chiefs’ defensive improvement has been the secondary. Kansas City has ballhawks in their secondary, who have the fifth most interceptions in the league with 16.

Starting safety Tyron Mathieu is the leader of the Chiefs defense. Mathieu has had a strong season in coverage with 4 interceptions, while also having 75 tackles and two sacks.

Mathieu said he loved the great group of guys on the Chiefs and wants to win a Super Bowl with this team.