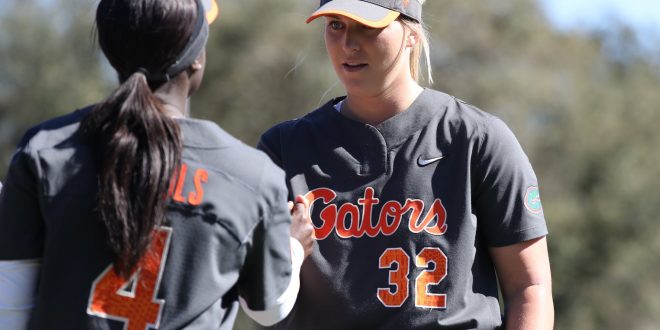 With two outs and the bases loaded in the bottom of the fourth, Gator softball trailed 7-1. Kendyl Lindaman lifted a deep drive to center field. The ball disappeared into the mitt of Michigan’s Haley Hoogenraad, and with it the Gators’ chance at mounting a comeback.

Hoogenraad’s catch at the wall snuffed out Florida’s best opportunity to put a dent in Michigan’s lead. Michigan ended the game early, holding an 11-2 lead after six innings of play.

A five-run, three-error first inning by Michigan haunted the Gators. Florida also ran out of offense. Charla Echols‘ first home run as a Gator and a solo shot by Lindaman made for the team’s only two runs.

Taylor Bump and Lou Allan each homered for the Wolverines in the sixth. Both tallied two runs and two RBIs. Morgan Overaitis added a three-hit game and another two runs for Michigan.

Natalie Lugo started for the Gators, but only lasted one inning. In the opposing circle, Alex Storako fared much better. Storako completed all six innings and struck out seven.

B6: BALLGAME! Storako closes it out with her 7th strikeout of the contest. Wolverines end this one early.

The loss to Michigan overshadowed Florida’s victory over Fresno State in its first game on Saturday. Echols delivered when it mattered most for the Gators. Her first inning RBI single kick-started the Gators’ offense.

Fresno State tied the game at three in the third inning. Echols responded with another RBI single in the fourth inning to take back the lead for the Gators. The transfer from Michigan State finished the day 5-6 at the dish with three RBIs.

Cheyenne Lindsey gave some much needed insurance with a solo shot in the fifth to push the lead to 6-3. The homer marked Lindsey’s first at the collegiate level.

Fresno State cut the lead to two and even loaded the bases in the final inning. Lugo entered and escaped unscathed, recording her first save of the season.

Rounding out the weekend

Florida (2-1) concludes its opening-weekend action in the USF-Rawlings Invitational on Sunday with another doubleheader. The Gators play Georgia State at noon and USF immediately after.