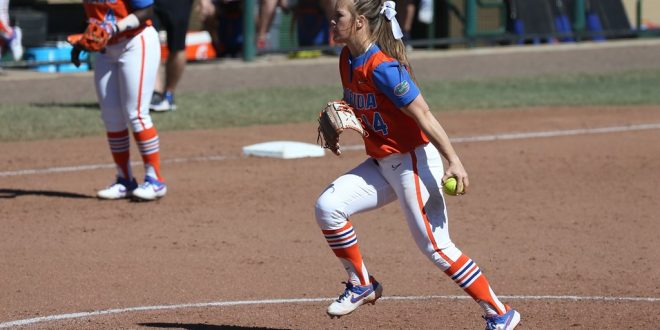 Michigan handed the Gator softball team its first loss of the season on Saturday afternoon. That clearly did not sit well with Rylee Trlicek and the Florida Gators.

On Sunday, Georgia State and USF stood in Florida’s way. The Gators beat them by a combined score of 16-1. It was a rough day for anyone not wearing orange and blue.

Trlicek steamrolled her way through the Georgia State lineup. In five innings, she struck out six on 70 pitches and didn’t allow a hot; the lone batter to reach base was hit by a pitch.

The no-hitter marked the fourth in school history thrown by a freshman. Kelly Barnhill’s no-no against Arkansas in 2016 is now the second-most recent example.

Natalie Lugo held USF hitless until the sixth inning in the second game of the day. Overall, Florida pitchers went 12.2 innings before yielding a hit on Sunday.

A four-run fourth and a five-run fifth inning propelled the Gators to a 10-0 win over Georgia State. Jordan Roberts homered in both of those innings.

Jade Caraway connected for a two-run shot in the fourth. Baylee Goddard put the nail in the coffin with a pinch-hit three-run homer; her first career home run for the Gators.

Hannah Adams also cashed in with a three-hit game and an RBI double.

The Gator offense continued to roll against USF in the second game of the day. Jordan Roberts created a healthy 4-0 cushion in the fifth inning with her third round-tripper of the day.

In the sixth, Madison Epperson spoiled Lugo’s attempt at a second consecutive Gator no-hitter. She hit a solo homer with two outs for USF.

Charla Echols answered for the Gators with a two-run tater in the top of the seventh. The homer pushed Florida’s lead to 6-1. Trlicek nailed down the save to top off her memorable day.

Florida improved to 4-1 with the Sunday sweep of Georgia State and USF in the USF-Rawlings Invitational. The Gators return to Katie Seashole Pressly Stadium on Tuesday to begin a nine-game home stand.

An exhibition game between the Gators and the USA Softball Women’s National Team is scheduled for Tuesday night at 6. It should be an interesting test for the Gators before returning to regular-season action on Wednesday.

@NevadaCullen
Previous Gator softball splits doubleheader; run-ruled by No. 17 Michigan
Next Miami Heat Lose on the Road to the Trail Blazers