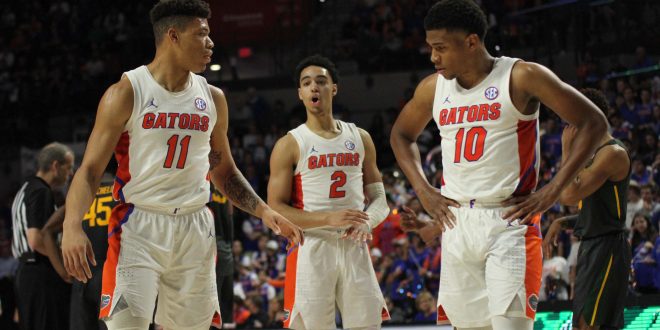 It was a tale of two halves for the Gators. In the first half, Florida’s offense was fueled beyond the arc. The cost of this success from deep was no inside presence. Then, the script flipped for the Gator offense in the second half. Florida finally found a presence inside the paint. This balanced offensive attack, fueled by the sophomore trio, helped Florida pick up a much-needed 78-61 win as the Gators beat Texas A&M in College Station Wednesday night.

Coming into this one, Florida is 11-3 when shooting over 30% from deep. The Gators started hot from beyond the arc, converting its three of its first five attempts. Two of these threes came courtesy of Noah Locke.

It took the Gators close to 10 minutes to convert its first two-point field goal of the night. The first one came on a Keyontae Johnson driving layup, which jump started the Gator offense that went close to five minutes without a made field goal. The second two-point field goal came just seconds later. Nembhard picks off the pass and converts the fast break lay-in, tying the game at 15. Nembhard gave the Gators the 18-15 lead with a corner three-pointer.

Off a beautiful display of passing, Locke picked up his fourth three of the night. Then, Nembhard picked a three of his own on the next possession, extending Florida’s lead to 35-29.

Despite a late push by the Aggies to cut the lead, Florida held strong by taking a 37-34 lead into the half. The first half saw the Gators shoot 47.1% from deep with Locke leading the way with 14 points, shooting 4-6 from deep.

The #Gators take a 37-34 lead into the half. Noah Locke is leading the Gators with 14 points while shooting 4-6 from deep. Collectively, Florida is shooting 47.1% from three-point land. @ESPNGainesville

Florida stormed out of the gates in the second half, fueled by attacking the paint and second chance points. A missed Noah Locke jumper was cleaned up by Keyontae Johnson, who picked up the board and laid it in. Then, a Scottie Lewis rebound led to a Nembhard jumper to extend Florida’s lead to 43-37. On the next possession, the sophomore point guard cut through the defense with ease to lay it in, giving the Gators a 45-39 lead.

The Gators were only getting started on the offensive end, especially in the paint. A Johnson floater under 14 minutes left not only gave the Gators a 49-41 lead. It also gave the sophomore a career-high seventh straight double-digit scoring performance. The Florida lead hit double-digits thanks to a Noah Locke jumper.

The #Gators hold a 53-43 lead over Texas A&M. The Florida defense shut down the Aggies for seven and a half minutes without a made field goal. While the first half saw the #Gators get it done beyond the arc, they are attacking the paint this half. @ESPNGainesville

The Gator defense shut down the Aggies for seven and a half minutes without a field goal make. The first three-point field goal for the Gators came with about nine minutes left when Tre Mann hit the corner three, thanks to an impressive save from Johnson keeping the ball in play. This gave the Gators a 58-45 lead over the Aggies.

Aggies’ big man Jonathan Aku was a non-factor in this one, fouling out with zero points with eight and a half left.

Off an Aggies blocked shot, Florida maintained possession and thanks to strong ball movement, found Lewis in the corner for the three. This extended Florida’s lead to 63-45.

Nembhard took no prisoners on a drive into the paint, leaving two Aggie defenders on the floor. This gave the Gators a 67-50 lead.

On the next possession, Locke hit his fifth three of the night, giving the Gators a 20 point advantage.

Florida protected this lead, picking up a much-needed road win.

The sophomore trio propelled the Gators on offense. Locke led the team with a season-high 21 points, shooting 5-10 from beyond the arc. Nembhard wasn’t far behind scoring 23 points on 9-11 shooting. Johnson posted a double-double digit performance with 10 points and 10 rebounds.

Collectively, the Gators shot 51.9% from the field including 44.4% from three-point land. Florida dominated on the boards in this one, holding a 35-20 rebounding edge.

The Gators return home on Saturday as they host Vanderbilt. This game will see the return of former Gators head coach Billy Donovan. The court at Exactech Arena will be named in his honor at halftime of Saturday’s game. Tip-off is set for 8:00 p.m.