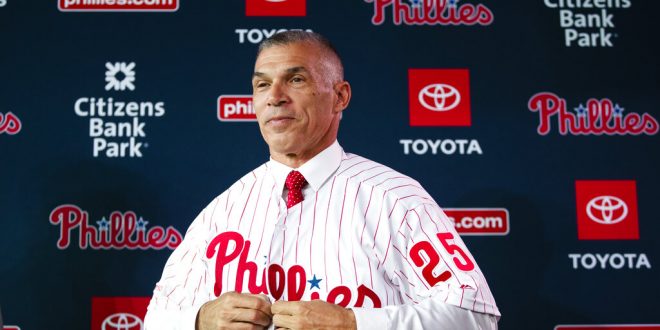 FILE - In this Oct. 28, 2019, file photo, the Philadelphia Phillies' new manager, Joe Girardi puts on his uniform during a news conference in Philadelphia. The Phillies enter spring training with a new manager who has a winning pedigree. Girardi, who led the Yankees to a World Series title, takes over in Philadelphia while righty Zack Wheeler and shortstop Didi Gregorious were the biggest on-field additions. (AP Photo/Matt Rourke, File)

In 2019, the Philadelphia Phillies finished fourth in the NL East and Gabe Kapler was fired before the NLCS. Now, Joe Girardi has his Phillies ready for the 2020 season.

On October 24th, the Phillies announced the hiring of Girardi and he was later introduced. In addition, Philadelphia made a couple high profile signings.

They lured Zack Wheeler, who is coming off a career year, away from the New York Mets with a five-year, $118 million contract. The Phillies also signed Didi Gregorius to a one-year contract to sure up the middle infield.

Will Girardi make a difference?

The Phillies had obvious flaws last year. Team ERA was too high, not enough runs were produced and coaching was not good in key situations. Girardi received was criticized in his final couple years with the Yankees for not being engaged with his players. To turn this club around, he’s going to need to be more hands on than ever.

Philadelphia has a deep line, a top-heavy starting rotation and a solid bullpen. Their are some players who do need to take a step forward though.

First is a no doubter with Bryce Harper. He has shown flashes of being a generational talent and is being paid like one, $330 million over 13 years. In his first year with Philadelphia, Harper did hit 35 home runs and a career high in RBI’s with 114. Despite this, his OPS was just .882.

With pitchers and catchers reporting yesterday, Girardi was asked about the sign stealing issue in the MLB and how his team can get an advantage.

Speaking of pitchers and catchers, Philadelphia will rely upon J.T. Realmuto who had a career high in home runs and RBI’s with his new team. He’ll look to take another step forward after being selected as MLB’s First-team catcher in 2019.

Another big job of Realmuto’s will be protecting signs for his pitching staff. It’s unfortunate how prevalent this issue is in baseball but Girardi does comment on the matter.

Philadelphia dealt with many injuries last year, too many to overcome at times. Andrew McCutchen tore his ACL and David Robertson missed most of the season because of Tommy John surgery, which is expected to keep him out for part of this season.

In addition, the Phillies will look for more out of Rhys Hoskins. Despite his 29 home runs and being the league leader in walks, he’s got strides to make.

Along with all these player additions, the Phillies brought in a new pitching coach. Philadelphia wants a clean slate from its fans after a down year. They have high expectations but also the talent to reach the postseason for the first time since 2011.