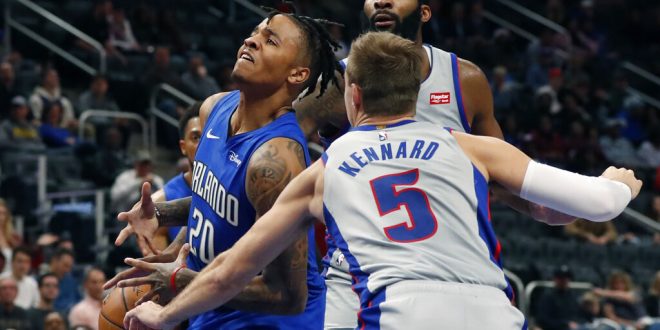 The Orlando Magic get a winning streak going after what seems like a long time against the Detroit Pistons. The back-and-forth game between the two teams took a period of overtime to decide who was taking home the W before the Magic prevail 116-112.

Breaking Down the Game

The Magic took the court using every trick in the book in the first quarter, outscoring the Pistons by 12. Detroit started the quarter on an 11-4 scoring run. But the Magic would take over from there. Following the Pistons scoring run, Markelle Fultz put up seven points, and Evan Fournier and Aaron Gordon both scored five to help the Magic finish the first up 32-20.

A pair of dunks by Khem Birch helped the Magic go up by 15. Then, Christian Wood and Markieff Morris led Detroit with 13 and 11 points respectively to help them catch up to Orlando. The Magic would go to the half only up 59-55.

The Magic only outscored the Pistons by two in the third, heading into the final quarter up 87-81.

Orlando tried to hang on to their lead, but Detroit closed the gap and pull ahead. Sviatoslav Mykhailuk hit two free throws then a three to put the Pistons within one, and Reggie Jackson’s 3-point shot gave the Pistons their first lead since the first quarter.

Down by four with 3:34 left to go, the Magic showed some life and took a 108-105 lead with 7.9 seconds left to go. The defense wouldn’t be able to close it out as Langston Galloway hits a three with two seconds left to send the game to overtime.

Orlando would take full advantage of Detroit’s two fouls in OT by going a perfect 4/4 from the charity stripe. The Magic won the game by a final score of 116-112.

The Magic nearly let slip what looked like a game they were going to run away with. One truly rough quarter was almost all it took to fall further behind in the playoff race. The win was greatly needed, but if the Magic want to see playoff action come April, they’ll need to find more consistency.

The Magic will have some time off before their next game against the Dallas Mavericks at home on February 21st.

Harrison is a sports coordinator at ESPN 98.1 FM/850 AM WRUF. He served as a beat writer for Florida Gators football for the 2019 and 2020 seasons. He also contributes to WRUF's Gainesville Sports Center segments and makes appearances on the Clash on Harp on Sports. Harrison has been a content writer for WRUF since January 2019 as well.
@HarrisonSmaj
Previous First-inning surge puts away Ospreys
Next West coast road trip ends in disappointment for the Heat