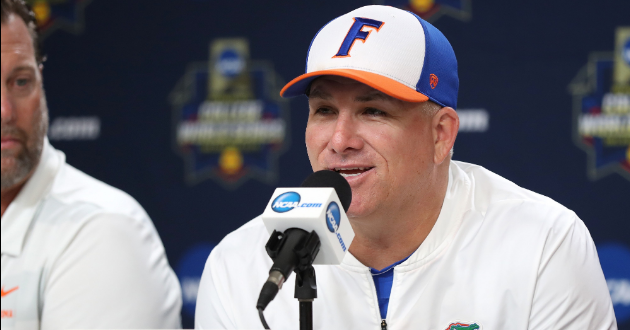 This weekend was slated to be a big one for the No. 8-ranked Florida Gators’ softball team. For the first time this season, the gates of Katie Seashole Pressly Stadium will be open on the weekend as the Gators host the Bubly Invitational.

For the fourth time in her short career, the southpawed freshman Rylee Trlicek got the nod. In her fourth start, Trlicek kept her ERA under 2.0, posting a 1.8 after 6.1 innings of work.

Additionally, the Texan rookie’s night ended after hurling 79 total pitches. 60, of which, went for strikes.

Offensively, Cheyenne Lindsey acted as the caboose in the lineup on Friday. The sophomore outfielder went 2-for-3 from the plate with an RBI and a two-bagger.

Adding to her hot start in the orange and blue, transfer Charla Echols also put up impressive numbers in the win over the Bison. Going 2-for-4 from the plate, the Gators’ No. 4 slotted batter contributed two RBIs, in addition to a double.

B5 | Echols drives in two with her single through the left side! Gators on top 4-0 over NDSU.#GoGators x #GatorsMarathon

Defensively, the Gators are playing more for contact while intrusting the field — and rightfully so.

Early on, Florida turned a 6-4-3 double play in the top of the second to retire the Bison. In the top of the sixth, Sophia Reynoso and Echols sandwiched NDSU’s Reimers while she was trying to steal third.

In Florida’s win over the Bison, Tim Walton collected his 900th career win.

Walton has been at the helm of the Gators’ ship for 15 years and holds a record of 777-168 while in Gainesville. He has also led the orange and blue to 14 NCAA tournament appearances, including two National Championships in 2014 and 2015.

On Friday night, the California-native became the second quickest coach to secure his 900th career win.

Earlier this season, Tim Walton commented on their new addition in Charla Echols. He noted that she might not send balls out of the park often, but that she would likely make lots of contact.

On Friday, the sophomore transfer showed that she can do both.

Batting in the No. 3 spot against the Lancers, in the bottom of the first, Echols put the Gators on the board with a three-run home run.

Just one inning later, Echols proved lethal again as she launched another pitch out of the yard — this time good for two runs.

Natalie Lugo spent the majority of the time in the circle for the Gators en route to the five-inning run rule victory.

Day two of the Bubly Invitational comes quickly for the Gators (7-1) as they return to action at 11:30 on Saturday morning for a rematch against North Dakota State. They will also see Longwood again at 2 p.m.

Ainslie is a journalism major at the University of Florida where she specializes in Sports Media. Her main passion is college football as it was a huge part of her childhood. Ainslie serves as a current correspondent for the Ocala Star-Banner, a newspaper for the Ocala, Florida area. She currently covers Marion County high school sports.
Previous Coming Soon: Billy Donovan Court
Next Gators host Vanderbilt as they honor Billy Donovan