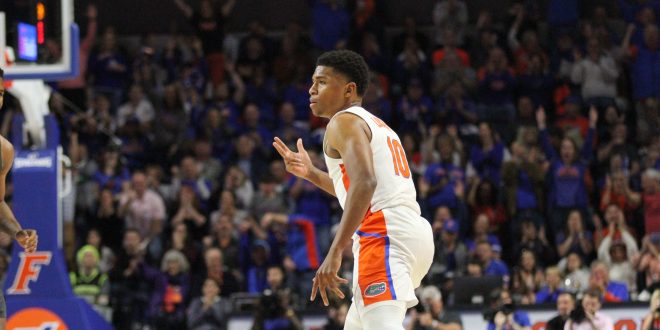 Saturday night is going to be a special night for Florida Gators basketball. Former head coach Billy Donovan, who led the program to back-to-back national championships, returns to Gainesville. The court inside Exactech Arena will be named after Donovan at halftime. In the midst of all the fanfare of Donovan’s triumphant return, the Gator men’s basketball team has a game to play. Florida returns home after taking care of business Wednesday night on the road against Texas A&M. The Gators welcome in the struggling Vanderbilt Commodores, who only have one conference win all season. It’s safe to say this is a game the Gators need to win.

Florida showed the progression of its offense in the team’s dominant win over Texas A&M Wednesday night. The Gators opened the game on fire from three-point line, sparked by the shooting of guard Noah Locke. Locke finished the game with a season-high 21 points, shooting a balanced 50% (5-10) from three-point land.

Locke said the key to the offensive surge in College Station was making the extra pass. He adds that this will be crucial on Saturday against Vanderbilt.

A common message during Friday’s media availability from the Gators is: this is a different Vanderbilt team. Last time the Gators met the Commodores, Florida escaped Nashville with a 61-55 win Feb. 1. Even though just two weeks have passed, Vanderbilt is gaining confidence on the offensive end. The Commodores won its first SEC regular season game in what seemed to be an eternity just five days after the Florida loss, knocking off then-No. 18 LSU 99-90.

Gators head coach Mike White has noticed this change in confidence from the Commodores.

Billy Donovan spent 19 years in Gainesville, building the Florida basketball program to one of the premier programs in the country. Florida is the last program to win consecutive championships in collegiate men’s basketball. During his time at the helm, Donovan boasted a record of 467–186. He led the Gators to 14 NCAA Tournament appearances, which include three trips to both the Elite Eight and the Final Four.

Donovan joined Sportscene with Steve Russell to discuss what this honor means to him. As his name will be immortalized on the court, he says it wouldn’t have been possible without everyone involved with the program.

#Gators head coach Mike White said the culture Billy Donovan set is based on winning and developing young men on and off the floor. @ESPNGainesville