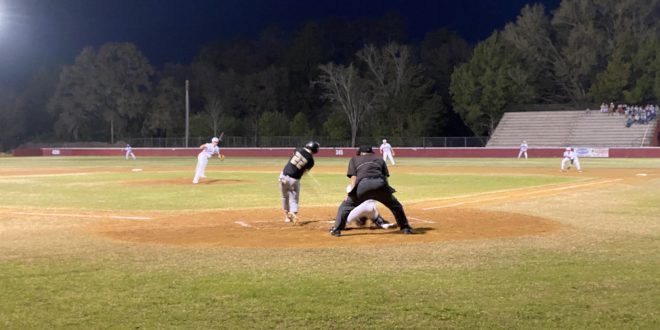 With the Major League Baseball season right around the corner you can say the Buchholz High School Bobcats are ready. The Bobcats have won their first two games. They faced the Williston Red Devils who played their opening game of the season.  The Bobcats played their second game and in this one, they dominated, winning 16-0.

It did not take long for the Bobcats to start scoring.  Coming into the second inning leading 1-0 senior Parker Green hit a home run extending their lead to 2-0. Meanwhile senior Luke Baker pitched three scoreless innings and remained consistent throughout the night.

During the third inning, junior Brett Blair doubled home three runs to give Buchholz a 5-0 cushion.

In the top of the fourth inning, the Bobcats added two more runs and the Bobcats, with a new pitcher in the game, got out of a jam in the bottom of the inning.

Dangerous top of the 4th for Williston. Buchholz has bases loaded with 2 outs @ESPNGainesville

It wasn’t until the sixth inning that the action picked up again. The Red Devils changed their pitcher to Mikey Rey and the Bobcats scored five runs. With the bases loaded, the Red Devils changed  pitchers again, this time putting Michael Reynolds. Buchholz then hit a grand slam home run leaving Williston to trail 16-0.

Next up for Buchholz

The Bobcats have started their season successfully with a record of 2-0. They will face the Lake Weir Hurricanes on Tuesday in Ocala.

Previous Gator Softball Hosts Bubly Invitational
Next No. 2 Gators Gymnastics Tries to Stay Perfect on Road Against No. 17 Auburn