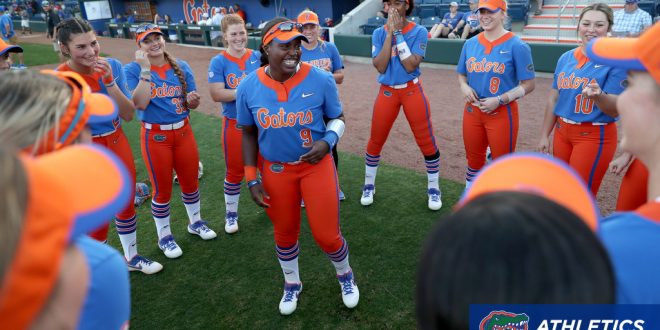 Three days. Three doubleheaders. Six games. A rigorous schedule lies ahead for the Gator softball team this weekend in the Bubly Invitational in Gainesville.

Senior Gator Jordan Roberts emphasized that above all, the Gators are ready for action.

Roberts mashed her SEC-leading fourth homer of the season against UNF on Wednesday. The total is also tied for first in the entire nation.

Over his next 10 games, Walton only needs one win to become the second-fastest coach in NCAA Division 1 history to 900 victories. This historic win can come as soon as Friday’s opener against North Dakota State.

The Gators have six chances this weekend for Walton to earn his 900th win. Walton knows that his pitching staff has a grueling task on its hands, due to the six-game weekend slate.

Florida is pitching to contact more than last year, which leads to more runs conceded. Walton understands that his offense needs to produce enough runs to win ballgames this year.

Gator shortstop Sophia Reynoso noted that the offense has truly stepped up to the plate so far. However, it’s not just the heart of the order contributing.

As for the middle of the Gator lineup, Kendyl Lindaman and Charla Echols are seeking redemption. Echols started on a tear, but went hitless against UNF. Lindaman also missed some opportunities to drive in runs her last time out.

Walton hinted at the likelihood of a bounce-back performance from the two sluggers this weekend.

Florida plays North Dakota State (1-3) and Longwood (2-2) twice each over Friday and Saturday. Longwood’s ace is Sydney Backstrom, the Big South’s Preseason Pitcher of the Year.

Florida A&M loaded the front end of its schedule, with all five of its losses are to ranked teams (Oklahoma State, LSU and Florida State).

None of this year’s teams in the Bubby Invitational have a win over the Gators, with a combined record of 0-35.

Florida takes to the field at 4:30 on Friday for its late-afternoon clash with North Dakota State.