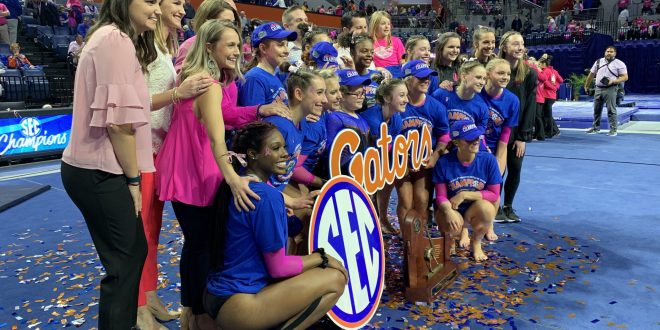 “Nothing is ever given in life. You’ve got to earn it.”

Shortly after clinching the SEC regular season title on Friday night against No. 8 Alabama (3-3), this was coach Florida coach Jenny Rowland’s way of explaining her team’s attitude in practice leading up to the meet. Everyone was fully aware of its significance.

Amidst an ocean of fans donning pink for breast cancer, the No. 2 Florida Gators defeated the Crimson Tide 198.050 to 197.450 in a sold-out O’Connell Center. The win crowns the Gators regular season conference champions, as Alabama was the last team with just one SEC loss that could catch Florida.

The Gators move to 8-0 and claim the title with three meets left until the postseason.

Trinity Thomas is the de facto star of the Gators squad, but Florida’s 198.050, their second-highest total this season, reflects strong performances from several on Friday night. Senior Sierra Alexander set the tone early when she recorded a 9.95 on vault, her career-high. After the meet, Rowland explained what went into Alexander’s strong showing:

Also, after a stretch of three meets out of lineups, sophomore Leah Clapper anchored beam. She wowed her team, the judges and the crowd with a 9.975 and claimed her first event title of the season. Rowland had this to say about the significance of Clapper’s performance:

Thomas again had a strong meet, competing all-around and scoring no lower than a 9.900 in any event. While this is her first time in three weeks not scoring a 10 this is the fifth straight meet she has scored at least 39.625 all around. It is hardly a down week.

Alabama Put Up a Fight

Alabama was the third-highest ranked SEC team in the nation, behind only Florida and No. 6 LSU. Despite the roaring capacity crowd, the Rolling Tide showed little nerves. The team posted a season-high away score and their second-highest of the season.

Junior Lexi Graber was the standout performer of the night. The reigning SEC balance beam champion registered a team leading vault (9.975) and beam (9.925) score, and tied the team-high with a 9.925 on floor. Her vault output was a career-high and was enough for the event title on the night.

I'm a senior journalism student at Florida. I love sports, and I love covering sports. I'm one of the beat writers for the Gator soccer team right now, and if you follow me on Twitter @johnmiceli13 you'll never miss a soccer update
Previous Gator Baseball Claims Game One Against #1 Miami
Next SB Scoop: UF to play Sun Devils, No. 1 Bruins