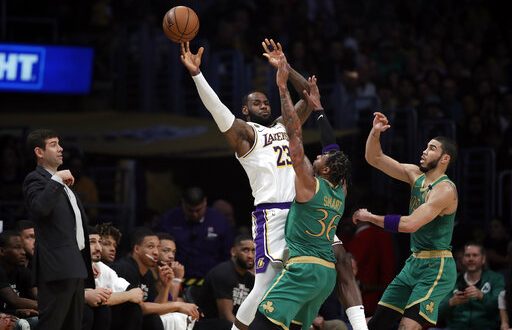 The rivalry between the Boston Celtics and the Los Angeles Lakers has a rich tradition dating back to their first meeting in 1948. Despite the history, this matchup proved to be more than a win for two teams looking to hit their peak performance.

The Lakers’ 114-112 victory in Sunday’s showdown showcased the playoff mentality and stardom of both teams.

LeBron James on playoff atmosphere in the rivalry matchup.

When the two teams met in January, the Celtics came away with a 139-107 blowout victory. However, in this matchup, James and the Lakers got the final word.

This rivalry matchup was nearly point-for-point heading into the fourth quarter. The Lakers took the final lead of the night with a LeBron fallaway jumper with 30 seconds left in the game.

Nothing like your first game-winner for the purple and gold against the green and white 👑 pic.twitter.com/q79n6C9U1G

Furthermore, James ended the night with a 29-point performance in his second meeting with the Celtics this season.

The revamp of the Lakers roster is proving to be a success. The Los Angeles bench combined for 43 points against a talented Boston team.

In addition, power forward Anthony Davis led the Lakers with 32 points and 13 rebounds. In his second rivalry game against the Celtics, Davis showed his range going three for five from the three-point line.

Davis on the Lakers’ ability to remain in the moment in games with a playoff atmosphere.

Davis and the Lakers return to the court Tuesday against his former team, the New Orleans Pelicans.

The Boston Celtics entered Sunday’s game looking to fill the gap for an injured Kemba Walker. Walker, who averages 21.8 points per game, missed his second consecutive game after having a procedure to his left knee.

Despite the absence, the Celtics proved they still have the potential to compete with playoff-caliber teams.

Forward Jayson Tatum stepped up for the Celtics with a 41-point performance against Los Angeles. In his third season in the league, Tatum has risen as the Celtics leading scorer, averaging 22.9 points per game.

Brown on Tatum’s abilities and the need for Boston to improve with him.

Next up for the Celtics is a road matchup with the Trail Blazers on Tuesday night.