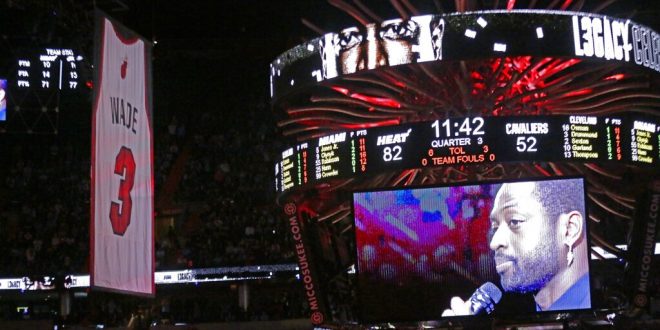 Former Miami Heat guard Dwyane Wade is seen on a video screen as his jersey number is raised at halftime of an NBA basketball game between the Heat and the Cleveland Cavaliers on Saturday, Feb. 22, 2020, in Miami. (David Santiago/Miami Herald via AP)

Dwyane Wade has become the fifth Miami Heat player to have his number retired. Wade’s number 3 jersey joined Shaquille O’Neal, Alonzo Mourning, Chris Bosh, and Tim Hardaway as part of a three-day celebration this past weekend.

The celebration began on Feb. 21 with an event that was titled “The Flashback” which entailed video tributes and interviews. The jersey ascended to it’s resting place on Feb. 22 during a ceremony at halftime in the Heat’s matchup with the Cleveland Cavaliers. The celebration finale commenced on Feb. 23 which featured the screening of Wade’s life documentary titled, “D. Wade: Life Unexpected” which profiles his life and basketball career.

The documentary features a collection of footage that has been shot by Wade’s friend Bob Metelus over the past ten years. Wade explained that at the conclusion of the screening, he looks to put basketball behind him.

Dwyane Wade was drafted to the NBA as the fifth overall selection in 2003 and spent the majority of his career with the Miami Heat. Wade has earned 13 All-Star selections, three All-Defensive Team selections, three NBA titles, eight All-NBA Selections. However, he is looking to put all of that behind him this Monday morning.

“I want everyone to understand that basketball Dwyane Wade was only a moment in time. Now I have to move forward with what I will be next and what my next calling is. So yes, I am glad that this day has come and I am glad that my documentary is coming out so that I can move forward and become whoever it is God wants for me next,” said Wade.

Wade retired from the court less than one year ago and left as an all-time leader in points, assists, steals, and games played for the franchise. His statistics alone warrant a retired jersey.

“God gave me an extraordinary talent. I worked at that talent. But in the midst of that talent my mom always said ‘son, your life is bigger than basketball.’ So, I’m done playing basketball and I’m probably working as hard as I’ve ever worked because I want to continue to want more and inspire people along the way,” explained Wade.

The Hands that Built Wade

As Wade’s basketball chapter has officially come to a close, he credited those that influenced him along the way and built the man he is today. Wade said, “Without the vision that Michael Jordan and Scottie Pippen and the Chicago Bulls gave me as a young child, I don’t know if I would have known I could make it here.”

Wade also admired Kobe Bryant and included his memory within his speech. “Kobe said the most important thing is to try to inspire others so they can be great in whatever they try to do. I hope I inspired you. Thank you for making me a part of your legacy. Please know you’re a huge part of mine,” said Wade.

Wade also showed gratitude towards his father, Dwyane Wade Sr., his college coach at Marquette, Tom Crean, and his coaches with the Miami Heat, Stan Van Gundy, Pat Riley and Erik Spoelstra. His speech also included several teammates where he expressed his gratitude for their role in his career.

Parker Welch is a Junior at the University of Florida majoring in Sports Media at the College of Journalism & Communications.
@parkerrwelch
Previous LeBron James and Lakers Outlast Tatum and Celtics in Rivalry Game
Next Men’s Swim and Dive Wins SEC Title, Women Place Second