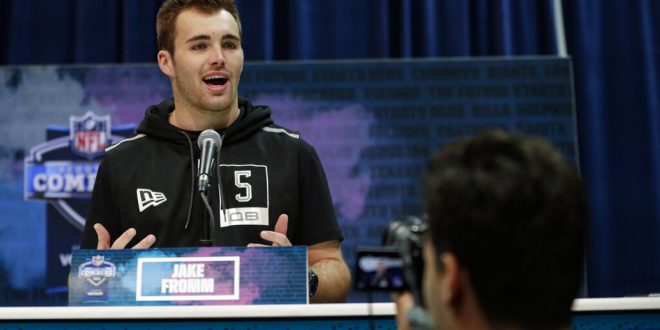 Predicting who will pick Jake Fromm and where they will take him in the 2020 NFL Draft is a difficult task. He’s got clear potential, but many believe he should have stayed at Georgia for a fourth year to improve his draft stock.

Last year with Georgia, the third year QB threw for 2,610 yards, 22 touchdowns and five interceptions and led the Bulldogs to a 12-2 record. Many believe it was his weakest season with the Bulldogs, as his completion percentage dipped seven percent lower than his sophomore season.

But he believes he belongs in the NFL, and one down year will not stop him.

The man in question is looking to prove mock drafters wrong, and with quarterbacks throwing tomorrow at the Combine, the former Bulldogs QB could make a big statement.

Who will take Fromm?

The predictions are unclear as to where and when Fromm will go. Mock drafts have him going lower than he would like, and cite that it would have been beneficial for Fromm to stay at Georgia and try to show his worth.

There are five teams that may need to take number 11 from the Bulldogs. Those teams are the Bucs, Panthers, Patriots, Colts and Saints, that could all be poised to draft Fromm, likely in the second round.

Many teams need a quarterback, but the ones who need one the most are not going to take the Georgia native high, as there are better options out there. Fromm is likely to go sometime in the second round, but for him, that is not good enough. He believes he is better than that.

When asked about some of his shortcomings Tuesday at the NFL Combine, the quarterback had a few things to say.

In particular, Fromm had something to say about those saying his throwing hand is too small:

He has a point, too. One eighth of an inch smaller than the desired nine-inch width is not a deal-breaker, and at the end of the day, experience is part of the equation too, which Fromm has a lot of. And that experience is in the SEC, one of the toughest conferences in College Football, which he cited as a big plus to his game:

It all starts tomorrow for the SEC-hardened Jake Fromm, and whether or not he can raise his stock in the NFL Draft lies solely on his shoulders.

My name is Caleb Mikita, and I am a telecommunications major at the University of Florida from St. Pete, FL. I am a fan of all things sports, but my main passion is baseball. My long term goal is to become a sports analyst or writer for MLB Network.
@@caleb_mikita8
Previous 49ers regroup after Super Bowl loss
Next Florida Women’s Basketball Team Home Finale Against the No. 1 Gamecocks