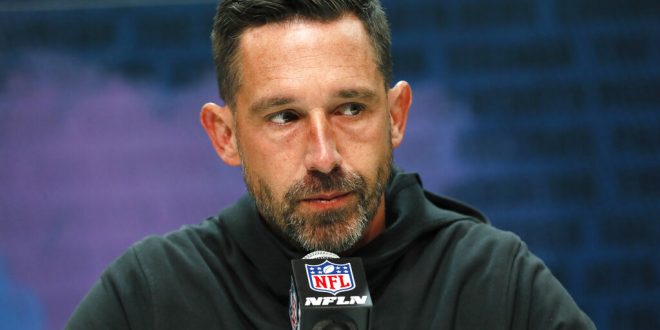 Twenty-four days have passed since the San Francisco 49ers fell to the Kansas City Chiefs in Super Bowl LIV. The 49ers, who allowed 21 unanswered 4th-quarter points, are still regrouping from the loss.

Shanahan said in a press conference at the NFL combine that the goal in the run game is to catch up with the Ravens.

Catching Baltimore in total rushing yards won’t be easy. The Ravens accumulated 3,481 yards in both the regular season and postseason, whereas the 49ers only totaled 2,917 yards.

The Ravens were knocked out in the divisional round by the Titans, but they still outran the Niners by 564 yards despite the 49ers playing two more games.

The difference was made by MVP and Ravens quarterback Lamar Jackson who added 1,349 rushing yards to Baltimore’s regular season and postseason totals. The Ravens also had an additional 1,000-yard-rusher in running back Mark Ingram, who totaled 1,040 yards.

As Lamar Jackson wins NFL MVP, a reminder of his most ridiculous play of the yearpic.twitter.com/B5Gf5m3W3Q

Jackson averaged 6.9 yards per carry in the regular season, whereas Garoppolo averaged 1.3 yards per carry. Garoppolo, a pocket passer, will never be able reach Jackson’s level of rushing success, but Shanahan hopes to get him involved.

The 49ers head coach mentioned that the program will try to improve franchise quarterback Jimmy Garoppolo’s 40-yard-dash time. At the 2014 NFL Combine, he ran a 4.97.

Before he became the franchise quarterback of the #49ers, Jimmy Garoppolo was representing the EIU Panthers in the 2014 NFL Combine. pic.twitter.com/lPrWY4HejY

Shanahan also discussed how he will continue the success the 49ers have had in the rushing game.

Mostert is the returning starter coming off a 772-yard regular season. Breida added 623 yards and Coleman ran for 544 yards on the season.

San Francisco General Manager John Lynch said he was proud of his first-year starting quarterback, who threw for 3,978 yards and 27 touchdowns in the regular season.

"It's unfortunate that one or two plays can really change everyones outlook."@JuiceCheck44 is frustrated with the criticism of his QB @JimmyG_10 after #SBLIV. pic.twitter.com/u1mQ10FAE7

Looking forward to the Draft

The Baltimore Ravens travel to Las Vegas, Monday, to take on the Raiders. The Ravens …