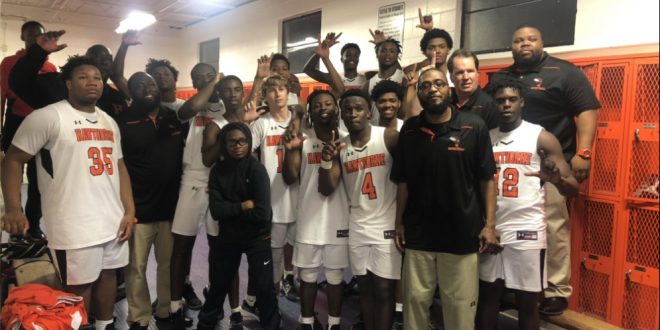 The tension was high at Bill Woods Court. The Hornets held a 28-point lead early in the third quarter, but that lead was whittled down to five by Wildwood early in the fourth. However, Hawthorne stepped up their shot-making in the final period, matching each blow from the Wildcats with one of their own. After a rough scare, the Hawthorne boys’ basketball team survives to fight another day, winning 69-59.

Slow starts have plagued Hawthorne all season long.  Against a tough opponent like the 1-seed Wildwood, a slow start could have severely diminished the Hornets’ chances at advancing.

That would not be the case Tuesday night. Head coach Greg Bowie made sure of it.

“That was the difference in the game,” Bowie said of the hot start. “I told the guys that we hadn’t shot well all year, and I asked them ‘Why not tonight?’ They took the challenge head-on.”

Jeremiah James (@thejerryjames1) takes the hit, but still finishes the difficult shot to put Hawthorne up 11-4 late in the first quarter against Wildwood in the Regional Finals.@ESPNGainesville @HawthorneHoops pic.twitter.com/QfSduEBeet

Hawthorne held Wildwood to just six first quarter points, while building a double digit lead to end the period at 17-6.

With time winding down in the first quarter, Carlteon Brooks (@CarlteonB) launches one from deep and gets nothing but net to beat the buzzer.

Hawthorne only built upon this lead in the second period, taking a 40-15 lead into the break.

It was a lockdown defensive effort by the Hornets, as they held a team who had scored 94 points in their previous game to just 15 in the first half.

Last week, Bowie said the goal was to hold Wildwood to under 60 points total for the game (Hawthorne Boys’ Basketball Beats Pahokee to Advance to Regional Finals), and his team managed that feat.

“We worked a lot in practice this week on trying to get them to spend at least 10 or 20 seconds on the offensive end,” Bowie said on how they fought their up-tempo offense. “They normally get up a shot within five seconds, so we wanted to pack it in some and make them play offense for 20 seconds.”

The third quarter is when things got interesting. The Hornets scored five of the first seven points of the quarter to turn their 25-point lead into 28, but Wildwood immediately responded with a 13-0 run to cut the lead to 15.

The Hornets took a timeout at 47-34 with 1:21 remaining to try to calm the team down and regain momentum, but Wildwood wouldn’t let up. The Wildcats ended the quarter on a 7-1 run, topped off by a half-court buzzer beater by Marcus Niblack, who led the comeback, scoring 11 points in the third. Niblack finished the game with a game-high 27 points.

Marcus Niblack (@marcus_niblack) nailed a halfcourt shot to send Wildwood to the fourth quarter with all the momentum, trailing just 48-41.@ESPNGainesville @ThePrepZone pic.twitter.com/qTY3ziiQ7e

The Wildcats were able to stifle the Hornets in the third quarter and get back into the game by employing a suffocating full-court press and trap.

“I knew their press was going to cause us problems with their length. Everybody in their starting lineup was over 6-2, so that’s a pretty long press and traps,” Bowie said on the challenges that posed. “We talked about it in practice, trying to bounce pass and ball fake. And my thicker guards were able to split the defenders.”

Wildwood cut it to five points in the first minute of the fourth, but Hawthorne held strong from that point out.

After scoring just eight points in the third period, Hawthorne scored 21 in the final period. They went 5/12 from the field and 11/19 from the free throw line to keep Wildwood at bay.

Senior guard and team captain Key’shaun Williams was a big reason the Hornets never relented.  He scored eight of his 11 points in the final period, hitting six of eight from the charity stripe and one of two from the field.

Lawrence led the team with 18 points in the game, doing most of his damage in the first half, during Hawthorne’s big run.

Dre Lawrence (@AgentD_4) gets to the basket to finish a tough layup in the second quarter.

Senior and leading scorer Torey Buie was second on the team tonight with 14 points. Likewise, fellow senior Jeremiah James also had a big game, scoring 11 points and hitting a number of difficult layups.

Jeremiah James (@thejerryjames1) shakes the defender and gets to the basket for an easy two.

Donavan Wright (5), Thurman Mills (5) and Carlteon Brooks (3) all also contributed to the scoring.

Thurman Mills (@thurmx65) gets open underneath the basket for an easy basket to put Hawthorne up 30-13 on Wildwood in the second quarter.@ESPNGainesville @HawthorneHoops pic.twitter.com/JnJrSJBuAx

With the win, Hawthorne advanced to 23-3 on the season and advanced to the state semifinals. It’s a bit of redemption for last year, as they fell in the Regional Finals to Madison County 53-48.

On top of that, the storybook season for the Hawthorne program continues as both boys and girls basketball teams head to Lakeland (Hawthorne Girls’ Basketball Advances to State Semifinals with win over Wildwood).

In the State Semifinals, Hawthorne will face Paxton, who defeated Graceville 65-45 Tuesday night. They will play Wednesday, March 4 in Lakeland, though the time is currently unknown.

“To be playing this late in the year, everybody’s pretty good. There are no slouches,” Bowie said on the tough upcoming challenge. “We’re still going to prepare like we normally do, obviously on the defensive end, just in case we don’t have a good scoring night, we can always defend.”

They will need the defense against Paxton, another high-scoring team. If Tuesday was any indicator, however, Hawthorne is always up for the challenge. It was only the second time all season that Wildwood had been held under 60 points.

Despite the odds, the Hawthorne boys’ basketball team survives once again, as they have all season.