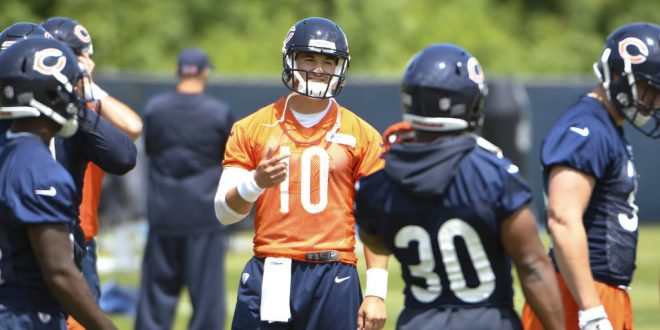 As Mitchell Trubisky enters his fourth year in the NFL, many people fear that he cannot become the quarterback that Chicago needs. Trubisky was the number 2 pick in the 2017 draft coming out of North Carolina with 3,748 yards and 30 touchdowns with only 6 interceptions. In the NFL, he has failed to come close to the touchdown to interception ratio he had in college.

When asked if his commitment to Mitchell Trubisky remains unchanged, Bears GM Ryan Pace said, “We believe in Mitch. Mitch knows he needs to be better. We need to be better around him. And that’s our goal.”

Also addressing the media regarding Trubisky was Chicago’s head coach, Matt Nagy. He stated he is giving his quarterback a clean slate for the 2020-2021 season.

On Good Morning Football, Matt Nagy spoke about Trubisky. He said “He’s growing. He’s completely growing… he had a couple games last season that [were] really impressive. We won because of him.

Our guy @PSchrags sat down with @ChicagoBears HC Matt Nagy to talk about the 2019 & 2020 seasons, Mitch Trubisky, coaching changes & more!

"We have a nice mix of veterans & young players getting ready for the draft and free agency. It's an exciting future for us." pic.twitter.com/LARwIt78wf

How the Bears can help Trubisky

Matt Nagy said that his offense needs to find its identity, especially in the run game. An established run game will take some pressure off Trubisky’s shoulders and allow him to be more efficient.

Nagy was an assistant under Andy Reid in Philadelphia and in Kansas City. One thing he learned is that he has to be willing to reinvent his offense if necessary. In Philadelphia, for instance, Reid ran a West Coast offense. After moving to Kansas City, he had to adjust to an option offense for Alex Smith and then changed it again for Patrick Mahomes.

The third year head coach’s offense has not worked well for Trubisky, who has not had more than 24 touchdowns in a season so far in his career. Similar to Reid, Nagy will now have to adjust the offense to better fit his quarterback’s play style.

General manager Ryan Pace has said he wants to have competition at all positions, including the quarterback. This could mean that the Bears could sign a QB in free agency or in the draft that would push Trubisky to get better to keep his starting role.

NFL Draft-hopeful and former teammate of Trubisky’s at UNC Charlie Heck was asked by the media about his experience playing with the quarterback and if the Bears have shown interest in drafting him. The Bears could bolster their offensive line with Heck to help decrease the number of times Trubisky was sacked – 45 times last season.

I asked OT Charlie Heck what it was like having Mitch Trubisky as a teammate at UNC, and he had nothing but good things to say about his former quarterback. #Bears pic.twitter.com/zleXqjFxBG

Jensen Young is a journalism student at the University of Florida. He works as a sports writer for WRUF.com and is the voice of trendings on Wednesday mornings on the WRUF radio station.
@Jensen_Young9
Previous Brissett’s future in question
Next Tua Tagovailoa near ready for the NFL