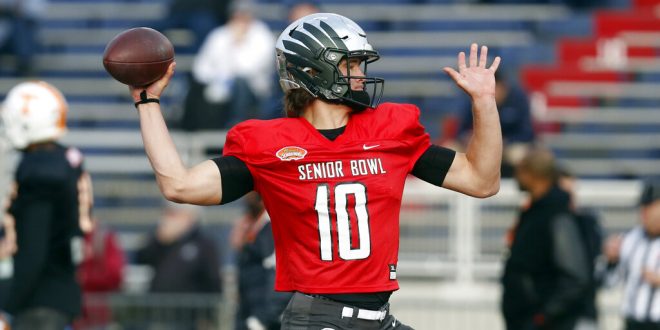 One of college football’s most promising gunslingers takes to Lucas Oil Stadium to showcase his skills today. No, it’s not LSU’s Joe Burrow, and no it’s also not Alabama’s Tua Tagovailoa. Both quarterbacks will likely be in attendance, but neither will participate in on-field drills. Instead, NFL scouts will get to watch Oregon’s Justin Herbert — a 6-foot-6-inch powerful and mobile young star out of Eugene, Oregon.

Most scouts expect Herbert to be the third quarterback drafted in the 2020 NFL Draft. The 2019 Rose Bowl winner had the chance to declare for the NFL Draft following his junior season.

But Herbert chose to play for the Ducks his senior year of college, and indeed, he did nothing but boost his draft stock. The 21-year old completed 67 percent of his passes to go along with 32 touchdowns. He rushed for another four touchdowns only threw six interceptions in 2019.

One year ago, most scouts already knew that Herbert has NFL potential and abilities. Another season at Oregon under head coach

Herbert spoke passionately about football and his career goals in the buildup to this week’s combine.

He’s a changed man, and he’s ready for the @NFL.

We caught up with Justin Herbert during the first few days of the NFL Combine. pic.twitter.com/sszaPPGWWM

Herbert said it publicly — he doesn’t really care where he’s playing football come September. At the moment, Herbert’s main goals are to “keep improving” and “play football for as long as he possibly can.”

So which team is likely to give Herbert the opportunity of his life come April 23?

Everyone expects the Cincinnati Bengals to draft Heisman winner Joe Burrow with the No.1 overall pick. The Bengals need a long-term answer at quarterback, and Burrow is the draft’s best option. After that, it gets testy. The Redskins, Lions, Dolphins, Chargers and even Panthers have big question marks surrounding the quarterback position. It’s likely that Herbert is off the board by the time 10 picks have been made come draft day.

It’s also possible that Herbert gets drafted before Tagovailoa. Early signs on Tua’s recovery from a hip injury have been positive, yet some teams may not want to take a chance on his health. Outside these top three quarterbacks, Georgia’s Jake Fromm and Oklahoma’s Jalen Hurts also have a shot at being drafted in the first round.

Whichever NFL team lands upon Herbert will acquire a highly talented and electric quarterback prospect. Herbert is strong, passionate and mobile. He improved his decision making tremendously as his career went on at Oregon.

If he’s drafted by a top 10 team in April, there will likely be a hefty amount of pressure on the 21-year old’s shoulders to turn around a losing franchise. Although at this point, there are few questions regarding his skill set and his character.

Sports media and management student at the University of Florida. Content creator for ESPN 98.1 FM/ 850 AM WRUF.
@TheEdgarChavero
Previous Miami Dolphins are looking to improve
Next Ron Rivera wants fan support to return