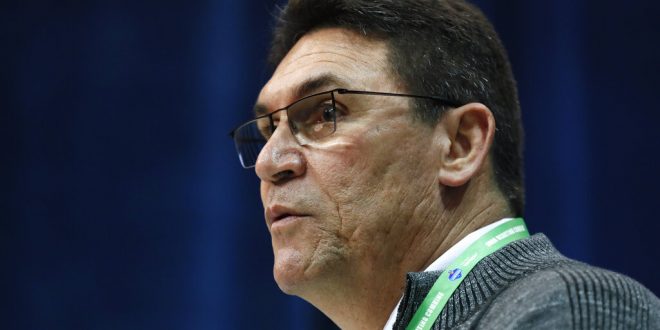 Head coach Ron Rivera has set the foundation he wants to build the Washington Redskins around. For the next phase, it starts with the fan base. At the NFL Scouting Combine on Tuesday, Rivera expressed he wants the fans to come back. While remembering his playing days, he knows how capable this fan base is of returning to RFK level of support. The Redskins finished the 2019 season last in the NFC East at 3-13. With a team that has only made the playoffs twice in the past decade and haven’t had a winning record since 2016, it is going to be a process.

Rivera expresses that they can’t do this without the fans. After the past couple of seasons the Redskins have had, it can take a toll on attendance. Being understanding of what the fan base is going through is the first step in bringing back fans in FedEx Field. With the NFL combine starting up and looking ahead to the 2020 NFL Draft, he hopes fans are excited about the upcoming season but the real test will be how they look in the win column.

Be confident in the future:

Rivera understands it’s going to be a process but something to look forward to is the youth of this program. The young talented roster that can grow together is what intrigued Rivera to accept the position in Washington. ESPN recently ranked the Redskins as the NFL’s most productive 2019 Rookie class. The Redskins finished the season with 19 players on injury reserve. It allowed for rookies to step in and speed up their developmental process.

One in particular is last season’s No. 15 overall draft pick quarterback Dwayne Haskins. After two rough performances off the bench early on in the season, Haskins redeemed himself and was named the starter in Week 9. Rivera expressed that he was confident in Haskins while hinting back to his comeback win against the Lions. However, Rivera is keeping his options open and wants Haskins to earn the job.

The Redskins have the second overall pick in the 2020 NFL Draft. According to Rivera, everything is an option.

After the press conference, Rivera told reporters he is meeting with quarterbacks Joe Burrow and Tua Tagovialoa. However, the Redskins decision is dependent on what happens with the Cincinnati Bengals’ first pick. The Redskins realize the valuable spot they have in the draft and are exploring all options such as staying put or trading back for more picks.

Football is back.  After a great season-opening game Thursday night, the first football Sunday certainly …