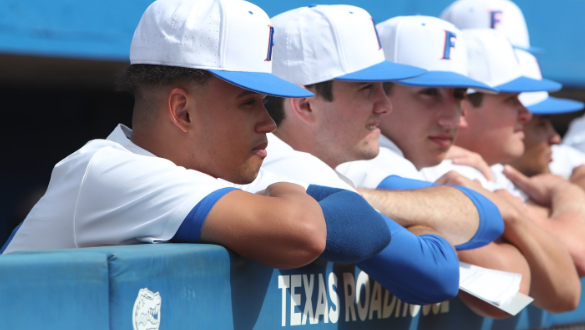 The Florida baseball team hosts a three-game series against the Troy Trojans beginning on Friday. The Gators have a chance to build on their already impressive start.

The Trojans enter the series absolutely mashing the ball. They scored double-digit runs in their first five games of the season. Also, three of their eight wins have come after trailing by at least four runs at some point in the game.

They have an experienced top three in the lineup that consists of hitters with at least three years of playing experience.

Smartt on his offense:

However, Smartt said his team is facing an exceptional staff this weekend that will present a challenge for them.

“I look forward to seeing our lineup against that caliber of pitching,” he said.

Speaking of pitching, the probable match ups for this weekend are as follows:

Smartt said Friday and Saturday are locked down but they’re still experimenting with the Sunday starter. He said Thomas and Ortiz’s performances will go a long way in determining Troy’s chances of winning.

All five of Ellis’s appearances are from the bullpen. The Trojans’ pen has a ton of arms that hasn’t really set up any defined roles as of yet.

Troy has no closer or eighth-inning setup man but they have plenty of mainly right-handed options Smartt likes.

Smartt on how he’s used his bullpen:

And if you ask Smartt, he wasn’t quite sure how his team’s defense would be. Right now, they’re fielding .984 as a team. Troy returned every starter except at third and first base.

All games this weekend can be streamed on SEC Network+ or heard over the airwaves of 98.1 FM/850 AM WRUF.