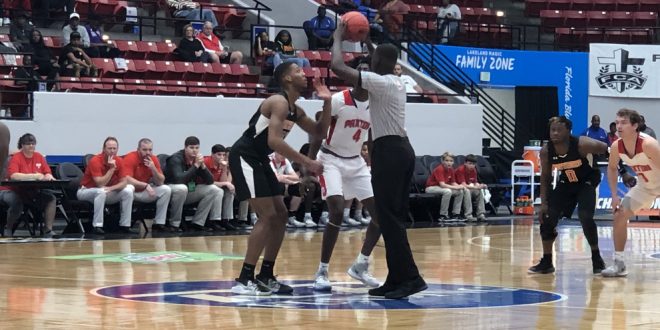 After watching the girls take care of business in Lakeland, the Hawthorne boys’ basketball team followed suit Wednesday. In a wire-to-wire win, Hawthorne stifles Paxton 70-58 to advance to the state championship.

What they do best: Hawthorne stifles Paxton defensively

After the win in the regional finals against Wildwood, Hawthorne head coach Greg Bowie preached that his team always defends, so they can survive even bad shooting nights. On Wednesday night, they didn’t need to worry about the poor shooting, but they brought the defensive effort anyway.

The Hornets held previously 22-5 Paxton to just 12 first-half points, including a mere five in the opening period.

Relentless on defense, Hornet players hounded Bobcats players at every opportunity. The team blocked four shots and nabbed six steals in the first half alone.

“We’re not a great scoring team in the half-court set, but we use our defense to get our easy baskets in transition,” Bowie said.

“Closing out on shooters,” Bowie said on what his team focused on specifically on the defensive end. “We did a lot of film on them, and we knew they didn’t rotate a lot of guys, so we wanted to be physical with them. We wanted to stay up on their ball-handlers and shooters.”

Bowie singled out Alonzo Wright as a player they wanted to restrain. Despite measuring in at nine inches shorter than the 6′ 6″ Wright, junior guard Dre Lawrence was tasked with locking him down in the first half. The smaller Lawrence did a remarkable job, holding Wright to just five points on 2 of 5 shooting and two turnovers in the half.

For Paxton, Connor Varnum scored 13 of his 18 points in the second half, getting to the line 14 times.

“He can use both hands and finish on both sides of the rim, so he was a tough guy to guard,” Hornets guard Torey Buie said of the matchup. “You just have to mentally stay focused. He might score, but you can’t let that get you frustrated. You just have to keep playing through it.”

The Hornets entered halftime doubled up on Paxton, 24-12. From that point on, the Bobcats came to life a little bit, but every time they made a run, Hawthorne stifled them again. Paxton cut the lead down to as little as six points in the fourth quarter, but Hawthorne immediately responded with two quick buckets to push it back to double digits.

The Bobcats elected to play the foul game in the fourth quarter. In theory, it seemed like a good strategy considering Hawthorne’s consistent struggles at the charity stripe all season long, but that was not to be Wednesday night.

The Hornets entered the game shooting just 51.4 percent from the free-throw line, but that average will certainly creep up after this game.

Hawthorne shot a staggering 31 for 37 from the free-throw line.

“The last month of the season, I’ve dedicated half of our practice time to free-throw shooting. So when I looked down and saw 31 of 37, I was very impressed and proud of my kids for locking in,” Bowie said. “This is an open arena and our gym is small, so depth perception probably affected them a bit.”

Bowie said that knocking down free throws was probably the main difference in helping his team maintain their lead in the fourth quarter. The Hornets shot 21 of 25 from the line in the final period.

The defensive effort was led by the already mentioned Lawrence, point guard Jeremiah James and stalwart center Donavan Wright. The 5’9″ Lawrence blocked a shot and grabbed two of the Hornets’ 11 steals in the game.

Wright had one of his best games of the season. Not only did he score seven points, but he also hauled in 14 rebounds and rejected four shots at the rim. He also collected a steal for good measure.

Jeremiah James (@thejerryjames1) dishes out another assist, this time to Donavan Wright, who finishes with the easy two.

James, meanwhile, was a menace defensively, racking up a whopping five steals. He also led the team in assists and was second on the team with 11 points, shooting 50 percent.

For once, the Hornets matched their defensive energy on offense. Coach Bowie said his team practiced really hard against the 1-3-1, knowing that’s what Paxton would employ, and it paid off. Outside of district play, the 70 points Hawthorne scored was their season high.

The offensive charge was led by none other than the team’s leading scorer, Torey Buie. Buie set the pace, scoring 32 points, outdoing his previous season high of 28. He got to the basket at will, shooting 10 of 19 from the floor. He also hit 12 of 14 free throws for good measure.

Torey Buie (@ToreyBuie) takes the contact, hits the layup and completes the three-point play in the third quarter.

“I come into every game just playing my game and doing whatever it takes to help the team win,” Buie said. “It was more of my teammates finding me in the right spots. We got a great point guard who finds me in open spots a lot.”

“I look at me and the rim. I don’t try to focus on the guy that’s coming to block it,” Buie said.

Onward to the state championship

With the win, Hawthorne improved to 24-3 on the season and advanced to the state championship. It’ll be a quick turnaround for the Hornets as they’ll play 23-3 Hilliard Friday at 7:00 p.m. in Lakeland again. Hilliard defeated Vernon 80-59 to advance.

It’s a familiar opponent for the Hornets, as the Red Flashes just moved out of their district this year. Bowie singled out 6’6″ Jacob Crews as a player they need to keep in check.

“I was kind of happy when they got out of our district because we would’ve had to face him three times a year. He’s a special talent inside and outside,” he said of Crews who is averaging over 22 points per game.

Bowie had a moment of self-reflection this week when he looked at the stat sheet. He took note of the fact that his team has low percentages in three-point shooting, two-point shooting and free-throw shooting.

“I was like ‘there’s no way we should be having this kind of success that we’re having.’ The only thing that I could come up with is the way that they play,” he said. “They don’t make excuses. We dive on the floor for loose balls. Guys step in and take charges. This team is special because they do it in other ways than on offense. They just find ways to get it done.”

The Hornets only need to win one more game, but they aren’t celebrating too early.