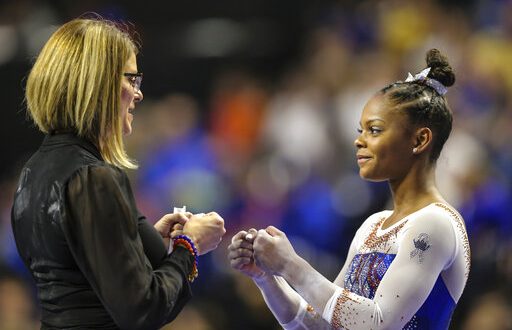 After traveling to Pennsylvania and downing the number 25 Penn State Nittany Lions (8-9) on Saturday,  second ranked Florida remains undefeated (10-0) with one meet left until the conference championships. This is the first time the Gators have been 10-0 since 2011.

Florida posted its highest road score of the season, with a 198.10. Their impressive output reflects a remarkable three gymnasts who registered perfect individual scores on the night.

Florida senior Sierra Alexander posted a 9.95 on vault, which is the maximum score for her performance on the apparatus. Alexander has been improving on vault throughout the year.

She initially equaled her collegiate-best, a 9.875, against Auburn three weeks ago before posting her first 9.95 against Alabama the week after. Now, she has done it again.

Trinity Thomas also put on a spectacular performance in Pennsylvania.  She achieved her fourth perfect 10 of the season and her first ever on floor. She has already posted perfection on bars and beam (twice) this year.

Senior Rachel Gowey set a special collegiate-best, too. She dropped her first career 10 when she completed a flawless beam routine. Earlier in the season, Gowey expressed her desires for a 10 on beam, claiming it was one of her biggest goals this season.

In addition to Thomas’ routine, the Gators performed well as a team on the floor. Savannah Schoenherr equaled her collegiate-best score, 9.925, and sophomore Halley Thomas made her season debut, registering a 9.75. The Gators are the second highest scoring team on the floor in the country.

Gowey’s 10 underlines the team’s season-long strong performances on the beam. Florida is the highest-scoring squad on the apparatus in the nation. The Gators recorded a 49.575 on Saturday, which is just about their season average.

The Nittany Lions also performed well on beam, although it was no match for Florida. Their 49.325 team score was their highest of the season.

Senior Tess McCracken led the way with a career-high 9.950. It was a fitting time to hit such heights, as Saturday was Penn State’s Senior Night.