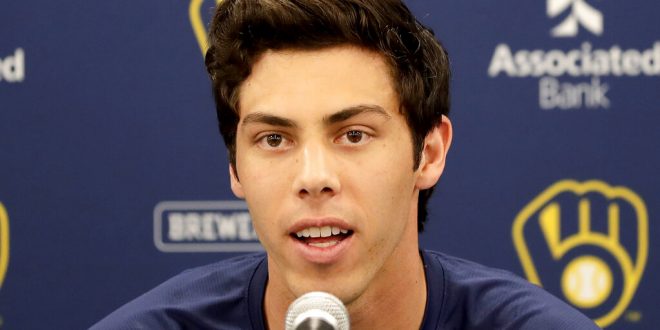 Freedom is not free, and neither is free agency.

On Friday, Milwaukee Brewers’ right fielder Christian Yelich signed a seven-year contract extension with the team. The decision to commit to Milwaukee long-term comes following a trade last season that moved Yelich from the Miami Marlins to the Brewers. It appears as though the batting superstar enjoys his new home in Wisconsin, and would like to stay awhile.

The deal is a seven-year contract, and it includes the two years left on his Marlins deal. So, the nine-year commitment is ultimately worth $215 million, almost 24 million per year. It almost guarantees that the superstar will never leave the Brewers in his career.

Make no mistake, this contract is by no means small. It is the largest contract the Brewers have ever handed out.

However, no league has bigger contracts than Major League Baseball. Contracts like Gerrit Cole ($324 million) and Mike Trout ($430 million) have seemingly become the future of baseball stars. Yelich’s deal is not quite as lucrative. His contract not only was one that Milwaukee could afford to actually pay him, but it will allow for some room to beef up the roster in other areas. The Thousand Oaks, California, native is just fine with that:

Perhaps part of the reason for the discount on the All-Star is the injury. Back in September, Yelich broke his kneecap against his former team when the Brewers faced the Marlins. In the first inning of that contest, he hit a foul-ball directly onto his own left knee, breaking the knee cap and ending his 2019 campaign.

Christian Yelich and the Brewers are closing in on a $200M-plus extension, per @Ken_Rosenthal

It would be the largest contract the team has ever given, topping Ryan Braun’s 5-year/$105M deal pic.twitter.com/ciyKiHym3U

Not only did Yelich and his agent agree to this deal despite being as financially flashy as Cole and Trout’s deal were, but the contractual language is serious as well. The deal has a no-trade clause, and no opt-outs.

This essentially guarantees that the 28-year-old phenom will remain in Milwaukee for the remainder of his career. He will be close to 40 years old when the deal finally closes in 2029, and the logistics of the deal make it extremely difficult for either party to get out of if they would ever want to.

With this deal, the Brewers are locking up one of the league’s top players for nearly a decade. At .329, Yelich tied for second in the entire MLB in batting average in 2019. He tied with Arizona’s Ketel Marte and was one spot behind Chicago White Sox shortstop Tim Anderson.

Even with the injury, the Brewers are still getting a top player in baseball to stay in their uniform. Yelich was the National League MVP in 2018, and finished just shy in the voting of winning it again in 2019, despite not finishing the year due to the injury.

Previous CBA Vote Looms Over NFL
Next Kerry Blackshear Jr.’s Ability to Play in the SEC Tournament is Still in Question