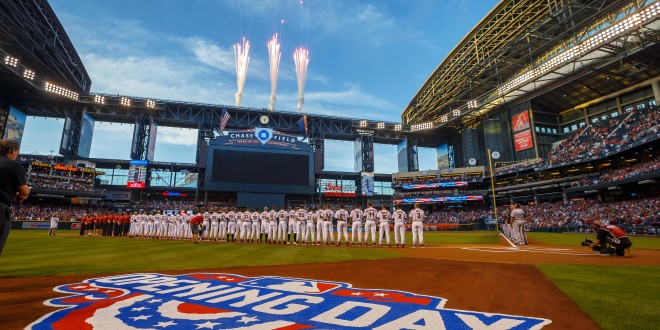 Major League Baseball announced they were going to delay opening day by at least two weeks yesterday. The announcement came as several Spring Training games were in progress. The MLB made the decision to cancel the remaining games in the day. They also moved Opening Day back at least two weeks.

Players all across the MLB had about the same reaction. Most understood the decision and said the MLB made the right decision by delaying the start of the season. Giancarlo Stanton of the New York Yankees spoke about the decision.

Next, Stanton went on to talk about how his team is handling the delay.

Finally, Stanton also talked about how weird it was for basically everything to in sports to cancel at once.

Tampa Bay Rays pitcher Tyler Glasnow also spoke about what the Rays will be doing during the delay.

Overall, MLB players everywhere are trying to keep things as normal as possible through this delay.

The Rays and the Marlins are just a few of the teams to make statements on this matter. They expressed their support for the decision and encouraged everyone to stay healthy.

A statement from the Tampa Bay Rays. pic.twitter.com/xyNpqI8lhk

Also, both teams are discussing changes in ticketing, but there is no new information at this time.

Overall, the coronavirus has put pretty much every sport on hold. MLB players, along with players from other leagues, are sad this is happening, but understand why. It’s to be as cautious as possible during this uncertain time, and canceling sporting events seems like the right call. The MLB said the season would be delayed at least two weeks, which means it could be delayed longer if needed. As Giancarlo Stanton said in the earlier sound, “Some things are bigger than baseball…”

If you googled Sean Kazmar Jr. last week, what you may have come across were …