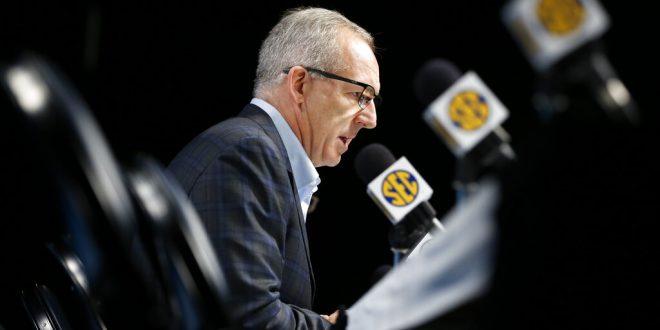 Greg Sankey, commissioner of the Southeastern Conference, talks about the decision to cancel the remaining games in the SEC NCAA college basketball tournament Thursday, March 12, 2020, in Nashville, Tenn. The conference tournament was cancelled Thursday due to coronavirus concerns. (AP Photo/Mark Humphrey)

The Sports world continues to seem less normal by the day. However, SEC Commissioner Greg Sankey said the plan is to bring back the normality in the fall.

Shortly after the SEC announced that all spring athletic events would be canceled, Sankey held a teleconference to look to the future. He made two things clear: Spring practices are only suspended and the “focus is on preparing for the 2021 academic year.”

Part of this focus is that spring practices have not officially been canceled. Practices are officially on hold until April 15. Sankey made clear that this doesn’t mean practices will resume April 16.

The CDC recommends no crowd gatherings of 50 or more. Some recommendations say no more than even 10. This level of social distancing would make conducting practices difficult. Even practices in May are unlikely. Despite the concerns, the goal is to playout the 2021 academic year as scheduled.

“Well obviously, I think about everything going forward because we’re being guided by public health information in decision making,” said Sankey in the teleconfernce, “but my hope is we can return to our normal organized activities, our normal experiences and be part of that celebration around soccer or volleyball, cross-country, football in the fall. But, we’ll have to see.”

When asked about revenue impact, Sankey said that that matter has taken a back seat in this situation. All decisions made were from a health and well-being standpoint.

The decision to suspend practice is not unique to the SEC. MLB, the NHL and other professional leagues made these moves as well.

Sankey is open to spring athletes getting another year of eligibility. However, he clarified that this is not just a senior issue. All student-athletes took a hit this spring.

The plans for SEC Media Day in Atlanta is currently a go. Sankey added, however, that the SEC is prepared for any “disruptions.”

Harrison is a sports coordinator at ESPN 98.1 FM/850 AM WRUF. He served as a beat writer for Florida Gators football for the 2019 and 2020 seasons. He also contributes to WRUF's Gainesville Sports Center segments and makes appearances on the Clash on Harp on Sports. Harrison has been a content writer for WRUF since January 2019 as well.
@HarrisonSmaj
Previous Bridgewater and Panthers agree to three-year deal worth $63 million
Next Kansas Finishes at No. 1