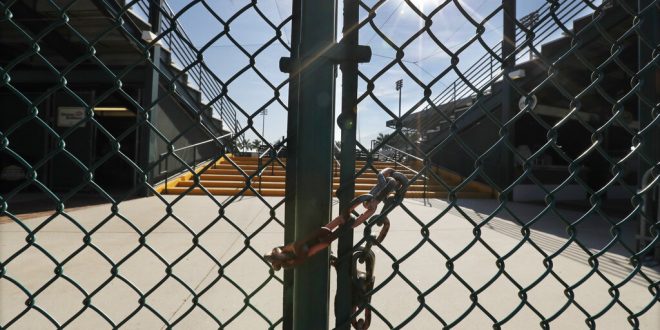 Gates to LECOM Park, spring training baseball home of the Pittsburgh Pirates are locked, Monday, March 16, 2020, in Bradenton, Fla. Major League Baseball has delayed the start of its season by at least two weeks because of the coronavirus outbreak and suspended the rest of its spring training schedule. (AP Photo/Carlos Osorio)

The MLB is continuing to weigh their options for the start of baseball as the coronavirus continues to spread.

Originally, the season’s start date was pushed back two weeks. With the coronavirus pandemic continuing to worsen, they are now shooting for a start date in June pending the virus.

If the season is to start in June, the concern for pay arises for the players and non-player employees. Unlike the NBA and NHL, who got to play a majority of their season, the MLB season has not started. This means they haven’t received gate receipts or television contracts, which are two of their greatest revenue streams.

Although non-player employees are receiving pay through April, the MLB fears they will have to start cutting costs. Salary cuts, deferred payments, furloughs or layoffs could start happening in May if the situation doesn’t improve.

Officials are also discussing how many games would be played and how long the season would be.

Some players have agreed they are willing to play as many doubleheaders as needed to get as close to the 162 game mark as possible. This would mean potentially playing two a week.

The MLB is also discussing extending the season into November and December. The only concern with doing that is the weather in northern areas.

Former player Mark Teixiera said he doesn’t think playing in November and December is an option.

He added that he thinks if the season can start by early June, that they should be able to squeeze in close to 100 games. If it starts in July or August though, the MLB will have to get creative if they want to play more than 60 games.

The league is exploring the idea of some teams continuing their season in a warmer neutral site or indoors. They also mentioned moving teams that normally play in metropolitan areas to their spring training facilities due to COVID-19.

ESPN columnist Buster Olney said he thinks the MLB is open to multiple ideas right now regarding the season, even it means playing a shortened season.

“It would be all about trying to make the best out of a bad situation,” he said.

The draft period could also be hit heavily as teams have pulled their scouts due to college and high school seasons being cancelled.

The MLB and MLBPA are still working on solutions to problems regarding play and pay as they continue to monitor the status of COVID-19.