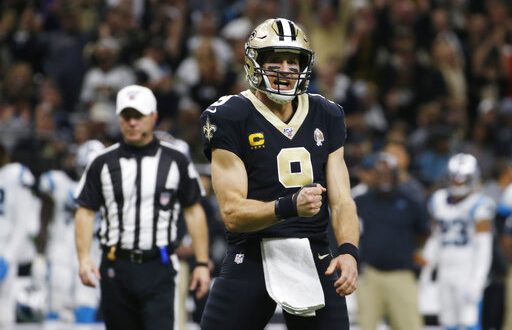 New Orleans Saints quarterback Drew Brees (9) gestures after a touchdown by wide receiver Michael Thomas (13), during the second half at an NFL football game against the Carolina Panthers, Sunday, Nov. 24, 2019, in New Orleans. (AP Photo/Butch Dill)

New Orleans Saints head coach Sean Payton was the first person in the NFL to test positive for the Coronavirus. Today, he is feeling better and is looking forward to the upcoming NFL season.

Payton, 56, said that his diagnosis was less severe than others. He woke up with a cold and fever on some days. However, after being tested, he started to feel much better.

While Payton’s illness was less severe than others, he made sure to stay at home and not risk harming others. He also discussed the importance of staying home during these times.

Appreciate the well wishes. I'm feeling better and fortunate to not have any of the respiratory symptoms. 4 more days at home.#BEATCovid pic.twitter.com/vvjbnqoeZx

Preparing for the 2020 season

Now that Payton has met his quarantine deadline, he can focus on the upcoming season for the Saints. New Orleans has one of the most loaded rosters in the league and is capable of contending.

Returning is all-time passing yards and touchdown leader, Drew Brees. The 41-year-old quarterback is returning this year in hopes of lifting the Lombardi one last time.

Payton and the Saints are in an interesting situation. Ahead of this year’s free agency, the team decided to place a first-round tender on their quarterback. However, the tender was not for Brees, who is a certain lock for Canton. Instead, it was for Taysom Hill.

Even if the rest of the league has only seen a small sample of Hill passing the ball, Payton and the Saints were taking no chances.

"The unique situation with our team and with our quarterback Drew Brees is he's announced he's coming back for his final season."

— Sean Payton on Taysom Hill's future with the Saints. pic.twitter.com/5zDMVQIJQS

Whether it’s throwing, catching or running the ball, Hill has carved out a role in Payton’s offense. However, it does not end there. he is also on special teams and has made an impact blocking punts and chasing down returners.

While Hill maybe one of the Saints most athletic players, subbing him in for Brees is not an easy coaching decision. Finding a way to keep both of them on the field simultaneously is what makes this offense so unpredictable.

The NFL world may not see much of Hill throwing this year with Brees returning. However, Payton knows that he has a starting quarterback for when Brees walks away.