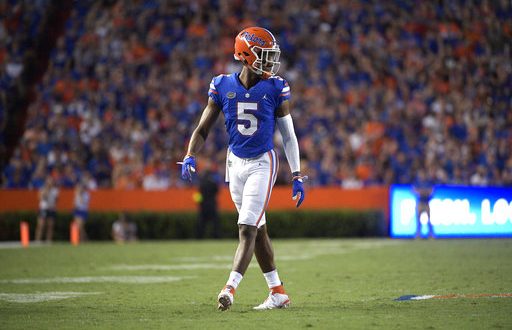 NFL Draft: Gayle breaks down where Gators may land

You hate to see them go, but you love to watch them get drafted.

Despite a hiatus for the broad spectrum of sports due to COVID-19, NFL Commissioner Roger Goodell says the draft must go on. This year, that includes a handful of former Gators looking to make the step into the professional world.

Austin Gayle, the Associate Director of Content for Pro Football Focus, oversees much of the draft analysis of potential NFL players.

Lamical Perine, Luke Ancrum and Tommy Townsend played their last games as Gators. A total of 22 seniors called the 2019 Orange Bowl Victory their final game. Also, C.J. Henderson decided to forgo his senior season, and declare for the NFL Draft after three years in the orange and blue.

Starting with C.J. Henderson, Austin Gayle says the cornerback has the most upside of any former-Gator entering the draft.

In fact, many analysts, including Gayle, consider Henderson to be the second best corner availble in the draft. He is expected to trail only Ohio State’s Jeff Okudah.

Henderson allowed 20 catches or fewer in each of his three seasons in Gainesville. That goes along with six interceptions (two of which were returned for touchdowns) and two force fumbles, despite being targeted once every seven snaps, according to PFF.

However, analysts are not as high on some of Florida’s other prospects.

Jabari Zuniga, who only played five games in 2019 due to a lingering ankle injury, does not garner as much appreciation as his defensive teammate.

Gayle mentioned that Zuniga might need work to become a consistent NFL player. More often than not, NFL general managers and coaches are not looking to develop players, they want to see instant action, with the exception of the quarterback position. All hope is not lost for the vaunted 2019 Gators’ defensive line.

Jonathan Greenard, the graduate-transfer from Louisville thrived with Dan Mullen and Todd Grantham in his lone year at UF. Gayle ranks Greenard 129th overall on his big board in terms of NFL-readiness. He is the only other Gator to crack the PFF Top-150 players in the 2020 NFL Draft.

Other Gators in the Mix

Gayle only mentioned Henderson and Greenard in his overall top-150 available. However, plenty of other Gators have a real chance to be drafted high.

A few of those come from what was one of Florida’s best receiving classes in its history. Names like Van Jefferson, Freddie Swain, Josh Hammond and Tyrie Cleveland are all departing, and are unfortunately meeting a stacked receiving class in the 2020 Draft.

Those five all go up against what could be five first-round wide receivers. Oklahoma’s CeeDee Lamb, Alabama’s Jerry Jeudy and Henry Ruggs, LSU’s Justin Jefferson and Clemson’s Tee Higgins. As the league becomes more and more pass heavy, there will be an increased desire for receivers that can change a game in multiple ways.

This is not a slight to the Gators receivers. This is a compliment to a stacked 2020 receiving class. Some analysts have Van Jefferson falling to the fourth round and Cleveland in the fifth round.

A Sports Illustrated Analyst also said running back Lamical Perine could fall to the fifth round. Also, linebacker David Reese might fall to the final round.

The 2020 NFL Draft begins April 23 and concludes two days later. The draft will be entirely virtual due to the COVID-19 pandemic.

Originally from Seminole in the Tampa Bay area, Kyle is a contributor for ESPN Gainesville as well as local NPR and PBS affiliate WUFT. Kyle wants to get into sports with a lofty dream of being a sports broadcaster. He was raised playing soccer and baseball while watching hockey and football, so the knowledge about various sports is fairly extensive.
@KyleFanslerUF
Previous Jeff Okudah prepares for NFL Draft
Next Gators men’s swimming dominate SEC awards