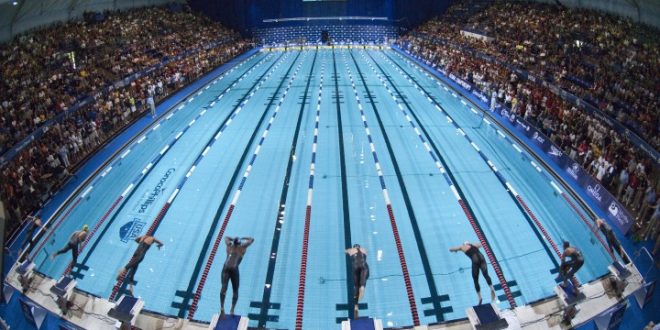 Despite having their season end right before the NCAA Championships, the Gator’s men’s swimming and diving team took home plenty of hardware. The SEC announced the awards just yesterday.

Coach and Swimmer of the year

Taking home the SEC Male Swimmer of the Year is sophomore Kieran Smith. Smith was sensational this season dominating the SEC Championships.

Smith set a new American and NCAA record in the 500 free (4:06.32) on the second night of competition at SEC’s. In addition, he set a new Florida and SEC record for his 200 free split (1:30.11) in the 800 free relay. His lead-off time powered the Gators to win their eight-straight 800 free relay event title. Their time broke yet another SEC record.

He claimed another SEC event title winning the 400 IM (individual medley). A Gator has now taken home this award seven of the last 10 years with Caleb Dressel most recently winning it in 2018.

It’s no doubt that in such a short time Nesty has his swimmers perform at the highest level. In his short tenure as coach, 14 Gators have been named All-Americans. This ranks fifth in the nation and tops in the SEC.

Nesty is no stranger to success at the University of Florida. As a student, Nesty was one of the best swimmers in the country. Between 1990 and 1992, he won three NCAA titles in 100 yard butterfly, one in 200 yard butterfly and a medley relay title.

As much as there are individual accolades in swimming, this team dominated the whole season. Five Gators made All-SEC First Team meaning each of these competitors were the top finisher of an event at SEC’s.

In addition, the Gators had several All-SEC Second Team members. These individuals got either second or third place in an event at the SEC Championships.

In order to endure long term success, something that the Gators have done, a strong young core is needed. This is highlighted in three Gators being named to the All-Freshman team; Eric Friese, Brennan Gravley and Kevin Vargas.

This new normal is something society might have to get used to. Regardless it was good to see that some things just don’t change; Florida Gators racking up awards.