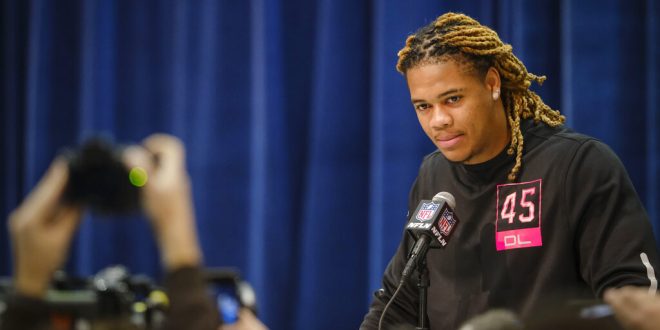 Chase Young Confident He’s the Best Player in the Draft

And with Joe Burrow being perhaps the best quarterback prospect the draft has seen in several years, it would be tough, and surprising, to see Chase Young picked over him. Nonetheless, the Maryland native is confident in his ability and his statement, with good reason.

Young self-appointing himself as the number one pick is bold, but his talent is unquestionable. The star defensive end certainly thinks that’s the case, making him worthy of being the number one pick. The former Buckeye believes his preparation is what sets him apart:

That preparation helped lead him to a Buckeye-record 16.5 sacs, with 46 tackles and six forced fumbles to go along with that last year. You don’t earn the title of best defensive player on reputation alone though. It also takes raw talent, which Young believes he has more than enough of:

An argument can be made that Young is the best defensive talent since Ndamukong Suh, as the Buckeye defender claims. But whether the Bengals, who hold the number one pick in the draft, will pick him over Burrow is heavily debated. Unlike many at his age and position, Chase Young’s attention to detail and ability to do the little things right is a big bargaining chip for the former third year Buckeye:

Young Next in Long Line of Buckeyes’ Defensive Powerhouses

Ohio State’s defensive prowess is well-documented. With ex-Buckeyes Tyquan Lewis, John Simon, Sam Hubbard, Joey and Nick Bosa now in the NFL, Chase Young will be among good company when he’s drafted. He believes he is the best player at his position since Ndamukong Suh, and better than those previous Buckeyes. He cites his play recognition as part of the reason for that confidence in himself:

Whether the Bengals take Young for his word and draft him over Joe Burrow though, is unlikely. At least according to many mock drafters, reporters and seemingly the Bengals themselves. Cincinnati is in need of both a quarterback and defensive end, but the allure of having the best quarterback prospect in years is working against Young.

It all comes down to Cincinnati’s decision on April 23 at 8 p.m. Until that first pick is announced, Young’s statements of confidence in himself ring loud and proud. If not first overall, the dominant defensive end will surely go in the first five.

My name is Caleb Mikita, and I am a telecommunications major at the University of Florida from St. Pete, FL. I am a fan of all things sports, but my main passion is baseball. My long term goal is to become a sports analyst or writer for MLB Network.
@@caleb_mikita8
Previous Panthers head coach looks to turn things around in Carolina.
Next Michael Jordan Talks About His Life, ESPN Series