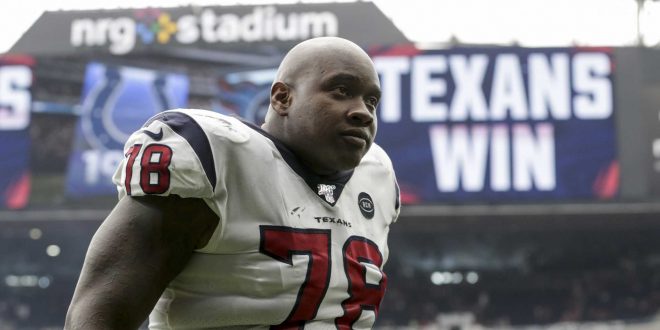 HOUSTON, TX - SEPTEMBER 15: Laremy Tunsil #78 of the Houston Texans walks off the field after the game against the Jacksonville Jaguars at NRG Stadium on September 15, 2019 in Houston, Texas. (Photo by Tim Warner/Getty Images)

From starting his journey as a five-star recruit out of Columbia High School in Lake City, Florida, Laremy Tunsil has worked to become one of the NFL’s top offensive tackles.

Tunsil went to Ole Miss after high school and announced his decision to enter the 2016 NFL draft shortly after Ole Miss’s bowl game his junior year. In February, countless mock drafts projected Tunsil to be the number one overall pick by the Tennessee Titans. However, 10 minutes before the draft began, Tunsil’s twitter was hacked. The account displayed a video of him wearing a gas mask and smoking a substance from a bong. At that point, Tunsil’s draft stock plummeted, and his life-changing night was sabotaged.

Due to the circumstances, Tunsil went from being the potential number one pick to falling to the 13th overall selection. When Miami was on the clock, the Dolphins went onto select Tunsil who became the highest selected offensive lineman for the Dolphins since Jake Long went first overall in 2008, and the highest-drafted Ole Miss player since linebacker Patrick Willis went 11th overall to the San Francisco 49ers in 2007.

A week before the 2019 season kicked off, the Dolphins traded Tunsil and wide receiver Kenny Stills to the Houston Texans in exchange for two first-round picks, a second-round pick, Johnson Bademosi, and Julie’n Davenport. Tunsil started all 14 games at left tackle for Houston and earned the first Pro Bowl selection of his career.

On April 24, 2020, the Texans reached an agreement with Tunsil on a three year deal worth a whopping $22 million a year, per Aaron Wilson of the Houston Chronicle. With $57 million of his new contract fully guaranteed, Tunsil is now the highest-paid left tackle in the NFL.

Not Ruling the Texans Out

After getting trounced in the divisional round by the Kansas City Chiefs 51-31, Tunsil still has faith in his squad to run the table during the 2020 season. Despite losing All-Pro receiver DeAndre Hopkins in a trade to the Cardinals, Tunsil remains confident in the Texans’ offensive abilities.

“We have the tools right in front of us on this team and we can get it done. It just starts with us,” he said.

Tunsil will now go to work as one of the league’s best left tackles, and he will be protecting quarterback Deshaun Watson’s blind side for years to come.

Angel is a student at the University of Florida. She is a Multimedia Journalist who is currently a Sports Reporter and Writer at ESPN Gainesville. Follow her on Twitter (@angelcwells) and Instagram (@angel_wells). Be sure to follow her NFL Twitter account to stay up to date with the latest NFL news. (@UpToDate1NFL)
@angelcwells
Previous Former Gators’ Assistant Coach Matt McCall’s Journey Through College Hoops
Next How Will College Football Return Amidst COVID-19 Pandemic?