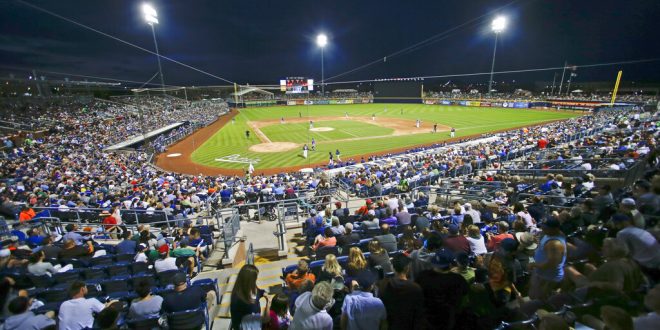 FILE - In this Thursday, March 12, 2015 file photo, Peoria Sports Complex Stadium host a spring training night baseball game between the San Diego Padres and Los Angeles Dodgers in Peoria, Ariz. Putting all 30 teams in the Phoenix area this season and playing in empty ballparks was among the ideas discussed Monday, April 6, 2020 during a call among five top officials from MLB and the players' association that was led by Commissioner Rob Manfred, people familiar with the discussion told The Associated Press. (AP Photo/Lenny Ignelzi, File)

The sports deprivation is over, and there is live baseball. ESPN has reached an agreement with the KBO League to air live game stateside. For many, this will be a nice sign after weeks of no sports due to the coronavirus pandemic.

This is the highest level of professional baseball in South Korea.

The first game will air this evening on at 1 a.m. EST between the NC Dinos and the Samsung Lions. Take a nap beforehand if you have to.

According to ESPN baseball columnist Jeff Passan, there will be games six days a week.

First pitch of the Korean Baseball Organization season is at 1a ET, less than 14 hours from now, and we’ll be calling the game between the NC Dinos and Samsung Lions.

Here at WRUF, we are going to help get you to get ready for tonight by helping you get to know the KBO, and so you can pick your team.

The most important question is who is playing. There’s nothing worse than putting on a game and wondering who these guys are.

The KBO League currently has 10 teams in the league that play a 144-game schedule. Teams are listed in order of last year’s standings with their records:

Some of these names should make the decision on who to root for easy. Minnesota fans have the Twins, Philly fans have the Eagles and Chicago fans have the Bears. Detroit fans might have to sit decide if they want to root for the Tigers or Lions. Sure, the Tigers are Detroit’s baseball team, but you might prefer Samsung over Kia. Decisions, decisions.

Sorry, National League fans, but the KBO League has a universal DH. If it makes everyone feel better, the universal DH is probably coming to the NL anyway.

The playoff structure is very similar to that of MLB. There’s a wild-card game, a best-of-five round, a best-of-seven round and then a best-of-seven championship. The only difference, according to the KBO website, is the wild card game can be more than one game.

Each team can have up to three foreign players. Coincidently, three is currently the total number of active Korean players in Major League Baseball: Rays’ Ji-Man Choi, Rangers’ Shin-Soo Choo and Blue Jays Hyun-Jin Ryu. Just to note, Jung-Ho Kang is currently a free agent, so he is not considered active for this purpose.

The KBO has helped revive some Major League careers. One notable example is Eric Thames who came back to the states a home run machine. Former Dodger Josh Lindblom signed a three-year deal with the Brewers after winning the 2019 KBO League MVP.

Harrison is a sports coordinator at ESPN 98.1 FM/850 AM WRUF. He served as a beat writer for Florida Gators football for the 2019 and 2020 seasons. He also contributes to WRUF's Gainesville Sports Center segments and makes appearances on the Clash on Harp on Sports. Harrison has been a content writer for WRUF since January 2019 as well.
@HarrisonSmaj
Previous Florida men’s basketball lands verbal 2021 commit Kowacie Reeves
Next Hall of Fame Dolphins coach Don Shula Dies at 90