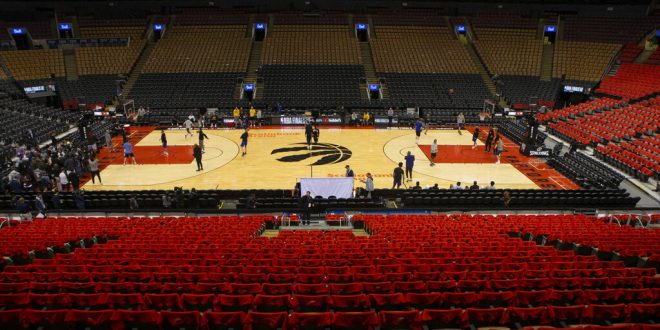 It’s been roughly three months since the NBA shut down on March 11 due to the COVID-19 pandemic. But now, the league is on the cusp of returning to play.

On Saturday, the NBA announced it has been negotiating with the Walt Disney Company about possibly resuming the rest of its season in late July at the ESPN World Wide of Sports Complex just outside of Orlando, according to an article by Casey Holdahl on the league’s website.

The area is an ideal spot for the NBA. The World Wide of Sports Complex has the facilities for both playing and housing. This looks to be the likely landing spot for the league to get back to action. However, there is still much to figure out regarding how it will go about resuming play.

There are a number of possibilities the NBA is considering for when it gets back to action. According to an article by USA Today’s Jeff Zillgitt, the league has considered picking up the season from where it left off, finishing only a part of the regular season, going straight into the playoffs, or doing some sort of play-in tournament to decide who gets in the postseason.

Whichever direction the NBA decides to go in, there are going to be logistics that will need to be figured out.

ESPN’s Brian Windhorst said there are a ton of moving parts when it comes to the league’s plan of trying to resume play in Orlando.

Windhorst also said that the idea of having all 30 teams ascend in Florida is highly unlikely. This decision will probably end speculation surrounding whether the NBA would pick up the season from where it left off.

One of the biggest concerns is having the proper amount of time to get back in shape, according to ESPN senior NBA insider Adrian Wojnarowski.

The players are concerned about sustaining an injury. This is an issue after being limited in what they could do workout-wise the last few months.

As the weeks progress, it will be interesting to see what kind of steps are taken in trying to formulate a plan to return to the court. Wojnarowski said this might be the time where Silver has to start making the tough choices.