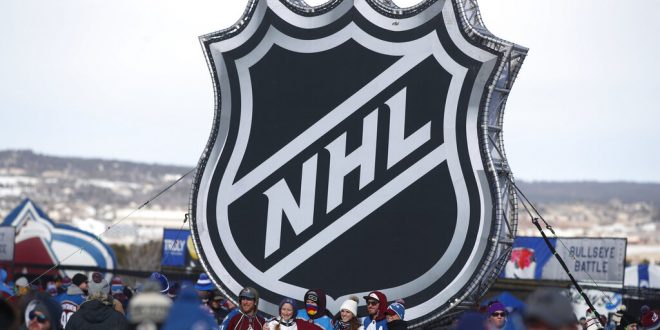 FILE - In this Saturday, Feb. 15, 2020, file photo, fans pose below the NHL league logo at a display outside Falcon Stadium before an NHL Stadium Series outdoor hockey game between the Los Angeles Kings and Colorado Avalanche, at Air Force Academy, Colo. The NHL Players’ Association’s executive board is voting on a 24-team playoff proposal as the return-to-play format, a person with knowledge of the situation told The Associated Press, late Thursday, May 21, 2020. (AP Photo/David Zalubowski, File)

The NHL announces that it will end the regular season and go straight into the playoffs with 24 teams if the season returns.

Commissioner Gary Bettman announced the plan to return to play yesterday still needs to go through the approval of the NHL Players’ Association. The plan also includes notes on how to address safety and the NHL Draft.

With this plan, only seven teams don’t get an opportunity for the Stanley Cup. The rest of the league will go into a tournament style playoffs. Take a listen to the commissioner breakdown of the playoffs.

As cool as a tournament would be to decide and champion and how there is a desire for sports, it doesn’t matter if health and safety is still a concern. This is what Bettman had to say on the matter.

The next big question is when the league will return. Bettman said the league hopes to enter phase 2 in early June which includes teams returning to their individual practice facilities or small group workouts. Phase 3 consists of team training camps opening. He added that this timetable will be in accordance with local and national health officials.

What if the NHL has a positive COVID-19 test during its season restart? Said deputy commissioner Bill Daly: “Our medical advisors [believe] that a single positive test, depending on the circumstance, should not necessarily shut the whole operation down…. https://t.co/jcc6OxMUtI

Even though the timing is still up in the air there is still room for optimism. NHL analysts Barry Melrose joined Steve Russell on Sportscene to talk about the proposal. Here’s what Melrose had to say on how long the players need to return.

Bettman also covered the topic of team personnel. He said teams should be expected no more than 50 members to the club’s name allowed to travel to the hub city calling this a “very limited number.”

With this format, the top four teams in each conference based on points percentage get a bye. Boston, Tampa Bay, Washington, and Philadelphia in the East with St. Louis, Colorado, Las Vegas and Dallas in the West. D

If the season continues, it could be really interesting to see how this style plays out. Melrose talked about the competitiveness and disadvantages to the top seeds in this format.