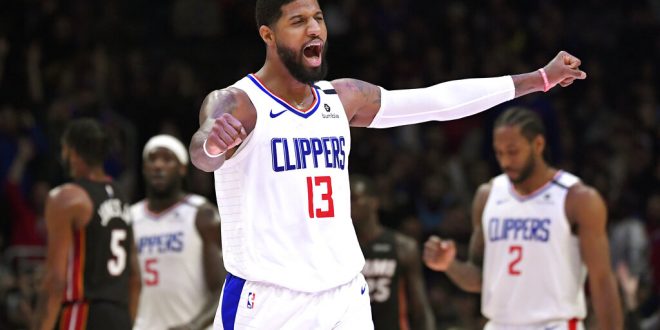 Los Angeles Clippers guard Paul George celebrates after the Clippers made a 3-point basket during the second half of the team's NBA basketball game against the Miami Heat on Wednesday, Feb. 5, 2020, in Los Angeles. The Clippers won 128-111. (AP Photo/Mark J. Terrill)

After months of talks and negotiations, NBA owners voted almost unanimously to approve a plan to resume the season on July 31 in Orlando.

The only team to vote “no” was the Portland Trailblazers.

There will be a conference call today with each team’s representative to approve the plan from the players’ side.

Assuming the players approve, 22 teams will resume their seasons at Walt Disney World Resort in Orlando. The NBA will use Disney for all activities, including training camps, games and playoffs.

According to NBA.com, the 22 teams represent the 16 teams that were in the playoff picture before the season ended and teams that are six games behind the eight-seed. Nine teams will compete from the Eastern conference and 13 teams from the Western conference.

After eight regular-season games, or “seeding games,” the playoffs will be the normal format.

Training camps will run from July 9-11 and Game 7 of the Finals is scheduled for October 12.

After agreeing on the format to return, there are still some questions that need to be answered. For one, the safety of the members of each organization is paramount.

According to ESPN, players and coaches will be allowed socially-distance and eat outside at restaurants. Additionally, members of each organization will be tested daily by the NBA for the coronavirus.

If a player or member of a team tests positive, that person will be removed from the team to quarantine. Players will continue to play while being monitored.

An issue arises with some of the older staff members traveling to Orlando. They are in the age demographic that has been hit hardest by COVID-19.

Coaches above that age threshold of 65 and who will be in Orlando are San Antonio Spurs coach Gregg Popovich, 71, Houston Rockets coach Mike D’Antoni, 69, and New Orleans Pelicans coach Alvin Gentry at 65.

Alvin Gentry believes that that decision should be left to the coaches.

Alvin Gentry: “At the end of the day, they're the league. They're going to make the choice. I think it's unfair if that's what they're doing. I understand the risk that I'm taking if I do get it. But hell, I want to be with my team and do my job. That's what they hired me for."

Although that comment was made by Silver last night, he has already walked back what he said, according to ESPN insider Adrian Wojnarowski.

NBA Coaches Association President Rick Carlisle: “I just spoke to Adam Silver and he admitted that he jumped the gun with his statement to TNT. The health and safety of our coaches is first and foremost. It’s entirely possible that an NBA coach in his 60’s or 70’s could be healthier than someone in their 30’s or 40’s. The conversation should never be solely about a person’s age. Adam assured me that we would work through this together to help determine what is both safe and fair for all of our coaches.”

Overall, this is good news for the world. This is one of those years where six months feels like six years. However, it is nice to see that some semblance of normalcy is peeking over the horizon. With the NBA voting to resume the season, maybe other leagues will follow.